How Carlos Ahenkorah became a meme on social media 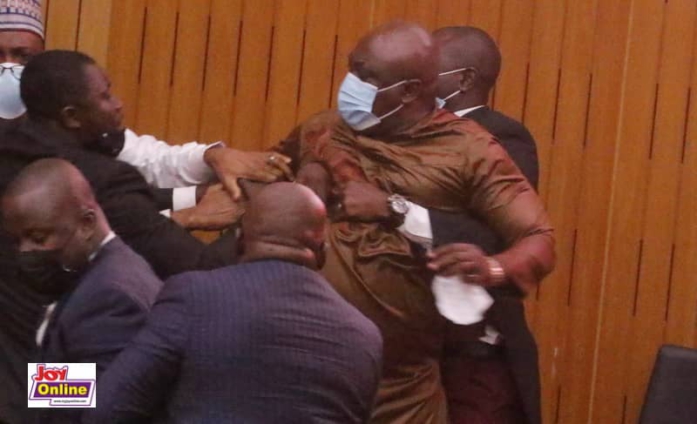 January 7, 2021, will go down in history as one of the most eventful moments of the Fourth Republic.

Out of the many events that characterized the election of the Speaker of Parliament, the name Carlos Ahenkora will stand tall in the minds of Ghanaians.

Some Ghanaians were shocked to see the MP for Tema West, Carlos Kingsley Ahenkorah snatch ballot papers from the hands of a Parliamentary official on Thursday morning.

In an attempt to disrupt the election process for the new Speaker of Parliament, Mr Ahenkora, with lightning-fast speed, snatched some of the ballot papers on the blindside of the Parliamentary officials as the ballot was being counted.

His dash across the floor of Parliament towards the nearest exit was, however, met with stiff resistance from his colleagues with the help of some security officials.

The ballot papers were retrieved, but only after he had suffered a few jabs from his colleagues.

As usual, social media reactions have taken the incident in Parliament on another tangent, creating memes of the legislator.

One Ghanaian in an attempt to explain the events, created some memes that detailed the moments Asawase MP tried to stop his colleague from running away with the ballot.

Others took to their social media handle to scold the MP and make fun of his actions.

I’ll tell my kids Carlos Ahenkorah was The Flash of our time 😂 pic.twitter.com/9f0gU7CqaU

I can imagine the number of knocks he chopped

Honourable doing shameful and disgracing stuff on #InaugurationDay2021 at parliament🤦

“Carlos Ahenkorah” ein mood when he got touched a little 😂 😂
“Kennedy Agyapong” pic.twitter.com/sa352Nrtpy

Carlos Ahenkorah must be an old student of Real Amass

I’m highly disappointed and surprised to hear Mr Carlos Ahenkorah to say he’s enjoying the trends for what he did. Some MPs doesn’t deserve to be called honourables. Disgusting!!!! #7thTo8thParliament #InaugurationDay

So Carlos Ahenkorah’s behavior nu was it a Covid-19 side effect or? Cos up till now I still do not understand why he did that oo😂😂😂 Muntaka too turn footballer dey kick box eii Ghana😂😂

jokes aside Carlos Ahenkorah no set a good example as a leader at all.This is something we’ve been preaching against in Elections and to see an MP doing it in parliament with the entire World watching is very embarrassing and uncalled for.This is unacceptable.#7thTo8thParliament

Is like Carlos Ahenkorah was influenced by someone to do what he did oo. Watch the video closely 😂😂😂 pic.twitter.com/cTaGsneQeL

I am still disappointed at how the military were swift to intervene. They should have allowed an extra 15mins to see if Carlos Ahenkorah and which MPs can defend their constituency😂.

When Kwabena Mintah Akandoh was enjoying buttocks, Carlos Ahenkorah was planning on how to snatch ballot papers. SMH. This life never balance ampa 🤣🤣🤣

See, it’s still just funny to me. I can’t stop laughing.😂😂😂😂😂
What Carlos Ahenkorah did was so unnecessary. Ah! The question i’m still asking myself is, where was he even taking those papers to? Herh, Panyin paa a ɔre dwane te sε akwadaa w’ahwim obi nam. 😂😂

With all due respect, I think the Honourable member of Parliament bfor Tema west Constituency, Mr. Carlos Ahenkorah should resign from politics and join the Ghana rugby team😎😎🔥💃😤😤anaa mose den?????

Ah, But Carlos Ahenkorah Paa, what was he thinking 🤔

Was he goin to burn them? Did he thought the other members will just watch him? Did he ask a colleague before taking this decision?

He be Hard guy moom 😃