How Ghanni foundation is turning around lives and growing leaders - MyJoyOnline.com

How Ghanni foundation is turning around lives and growing leaders 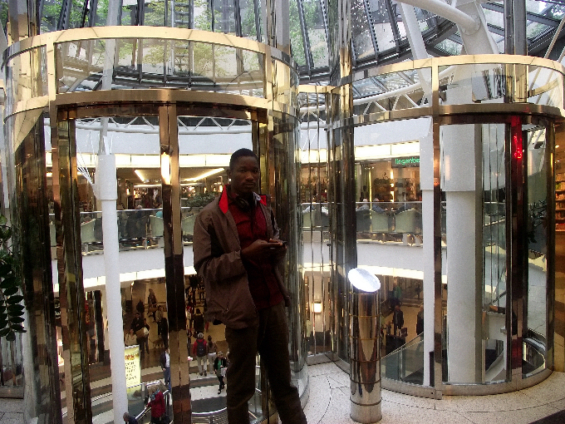 Inside a fruit-juice bar on the busy Oxford street, Oswald Suonbai-kyi makes his way to me from across the room, weaving through tables and chairs and sliding past customers sipping contentedly on their drinks.

He avoids eye contact with most of the people who look him over as he meanders through, until he finally reaches where I sit. We have been speaking on the phone for days now, and it is a joy finally seeing him.  A huge smile appears on his face. We exchange pleasantries then take our seats and proceed to interact.

25 years and a final year student at the University of Ghana, Legon, Oswald is studying English and French.  Everything he says about his study indicates that he is enjoying his time at the University, having amassed brilliant points the previous semester to add to his already excellent grades. Ironically, these two courses are ones he never opted for, when he applied to study at the University.

“I chose Business Administration and Nursing, two programs I thought I was going to get. But it didn’t work out and I ended up settling for English and French,” he said with a broad smile. He however concedes that in spite of not getting his initial choice, he has grown to love English; and French, he explains, will help advance a future career in international relations for him. After all, Ghana is surrounded largely by French-speaking West Africans and a language other than English is definitely an incentive.

A former student of the St. Francis Xavier Minor Seminary institution in the Upper West Region, Oswald’s current life is a sharp contrast to the one he previously lived in his hometown in the northern part of Ghana, where most of the inhabitants seem to be trapped in an eternal struggle to catch up with other regions in terms of economy, development, and opportunities. Life had been tough for him, to put it mildly; a situation brought about by the circumstances of birth. Despite this tough life, Oswald said he never lost hope for a brighter tomorrow, though where that ‘tomorrow’ was going to come from kept him unsettled for many years.

It was that ‘hope’ that guided him through the early days of his education all the way till University, but before he broke through, Oswald had to beat the odds to ensure his dream of escaping the clutches of poverty and educating himself became actualised.

After graduating from secondary school with excellent grades, Oswald tells me how he found himself at a dead end, unable to further his education. His parents are both deceased and the responsibility had therefore fallen onto his extended family, who, he says, though they genuinely wanted to help him go back to school, could not manage to come together to  raise funds for him to do so.

In the effort to help, he tells of an aunt who asked him to come over to Accra with the hope of supporting him to continue schooling, but eventually found it impossible to do for him in spite of all her good intentions.  “She genuinely wanted to help me, just like the rest of the family but things were not right and so I had to hold on until the right time came for me to go back to school.”

Oswald therefore decided to take up some employment while scouting for the opportunity to go back to school. This led him to take up a job with a security company, providing a buffer for a family in one of the rich areas here in Accra. It was a job that demanded full commitment and Oswald gave his best services to it. Luckily for him he was posted to an area which enabled him find time to read, instead of lying on a bench snoring. An avid reader, he spent his break-times reading books just to keep his mind refreshed.

He tells me how most of his colleagues who knew about the excellent grades he had from the senior high school could not believe he was working as a security man. “I was annoyed with everyone because it was so frustrating,” he said with genuine feeling in his voice.  “How can I not be in the classroom especially with all the good grades I got?” was a question he says he asked himself constantly.

After a year and a half as a security officer, Oswald said the hope that he brought with him from his village to Accra soon became a reality. A lady who knew about his plight informed a colleague at work to see how best they could support him. For a man used to being disappointed at the last moment, he had little expectation of their effort nor did he keep high hopes. “What if it didn’t work out”, he said to himself. But as fate would have it, the lady spoke to the said friend who, even though did not know Oswald, confirmed his willingness to support him to go to school.  The news thrilled him but he was still cautious, unwilling to believe only to be let down at the last minute. However, things were different this time. The said gentleman showed up and helped.

The Man Behind Ghanni Foundation

David Afugani, a young enterprising man from the northern part of Ghana who had had to eke his living whilst growing up, was the saviour who turned up to support the needy but brilliant Oswald to further his education. Shortly after they met, they started working on the requisite items and records Oswald needed for his admission.

From his personal finances, David committed himself to offering any assistance Oswald required to fulfilling his dream of completing university. A huge responsibility, especially at a time when he was also trying to put together his own family, David held true to his word, and got Oswald into the University with the assurance that if he continued to perform well, he  would continue to enjoy his support.  Thankfully, he has not disappointed, and till date Oswald continues to improve on his grades each semester. sal

“He (Afugani) has been extremely helpful. I never knew him until the first time we met and I must say he has kept his word and I am deeply grateful,” Oswald says today.

Oswald is not the only beneficiary. There are others who are benefitting from the generosity of David Afugani. Through the ‘David Afugani Foundation’ several brilliant but struggling students are being supported through different levels of their education.

“Education is the biggest tool to eradicating poverty and changing the society,” David says. For a man who believes that he could not have come through life without education, he is confident that through the foundation he has set up, he will be able to extend a hand to those in need of a hand to pull them out of the deadwoods of poverty.

At the moment, some of the foundation’s beneficiaries are spread across different educational levels – Junior High through to Senior High, to University first degrees and post graduate degrees. One of their current beneficiaries is a Ph.D student pursuing his studies at the University of Cape Coast, Ghana.