I was stunned by the proceed-on-leave style of dismissal- Perry Okudzeto - MyJoyOnline.com 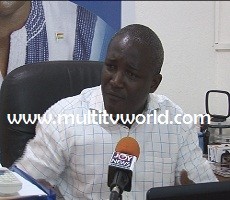 Discharged deputy Communications Director of the New Patriotic Party Perry Okudzeto said he is "stunned" by the directive by some national party executives for him to proceed on leave.

He said working for a political organisation is a voluntary service which neither required workers to take pensions nor to be made to proceed on leave.

He said in a manner akin to dismissing DCEs or asking them to proceed on leave, especially during military regimes, three national executives- Chairman Paul Afoko, Secretary Kwabena Agyapong and Acting Director of Finance and Administration- invited him for a meeting in the party offices and subjected him to several rounds of questions and answer sessions after which he was asked to proceed on leave.

Perry Okudzeto said he was asked how long he had worked for the party and whether or not he had taken his accumulated leave.

His answer was simple- he had worked for four years and taken no leave.

He said he was then directed to proceed on a two year accumulated leave which would take effect on Monday, 18 August, 2014.

"I was stunned. I had never heard any single [party] officer go on leave," he stated.

He said the explanations given were that the new administration is trying to professionalise the running of the party.

He said he is not worried by the development and would proceed on leave as directed, except to add that the NPP is a party of rules and at the right time, things will be done the right way.

Pollster Ben Ephson told Joy News if anybody ever doubted there was a crack in the NPP, what is happening now is the evidence of that crack.

"The chicken have come home to roost," he told Joy News' Evans Mensah adding it looks like the Alan, Akufo-Addo battle for the party's National HQ is on course.