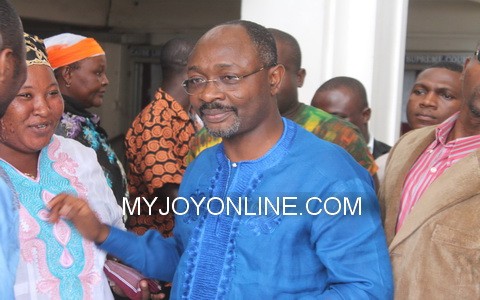 Embattled businessman, Alfred Agbesi Woyome says he was made an entity separate from Vamed Company Limited, the lead company of the consortium he formed in the bid to seeking funding for the construction of sports infrastructure for the 2008 African Cup of Nations (CAN 2008) in Ghana.

Continuing his evidence-in-chief at an Accra Financial court, Monday, Mr. Woyome, who is defending an allegation of willfully causing financial loss to the state in the sum of over GHC51 million, noted that the then government and the Local Organizing Committee (LOC) in 2005, wrote a letter introducing him as a separate unit in seeking for funding for the CAN 2008 projects.

According to him, the decision by the then government and the LOC in treating him separately from the consortium of companies, followed an agreement to his suggestion to get Ghana a sports legacy, in the form of constructing sporting facilities in the country that can take care of international sporting activities.

The witness told the court, presided over by Justice John Ajet-Nasam that Mr. Osei Bonsu Amoah, then Deputy Education, Youth and Sports Minister and Mr. Kwaku Agyemang Manu, then Deputy Finance Minister wrote the letters of introduction to several banks, with the lead bank being Exim Bank, US.

"Agyemang Manu wrote the letter because government was desirous of getting funding [for the project]", Mr. Woyome intimated.

Having been introduced to development partners, witness said he had to ensure that funding for the project is acquired.

Mr. Woyome noted that as a result, he had to travel extensively to establish offices in various countries including the US, Austria, Switzerland and Rome within a-two-year span and paying workers salaries, some of which, were charged on hourly basis.

He further told the court that he funded the environmental impact assessment on the site of the projects as well as feasibility studies on the viability of the entire project that the LOC contracted PMP Legacy Company, a company from England to conduct.

Woyome noted that the feasibility studies were required for MIDA, a World Bank group in the US to provide authority to Austria Bank, which had to be the lead bank for the CAN 2008 projects.

Meanwhile, Mr. Woyome indicated that the LOC refunded the money in respect of the environmental assessment report and promised to refund the monies involved in the other documents at a later time but that was not to be as the issue dragged until he secured a judgment  against the Ministry of Education, which is the supervisory ministry of the LOC.

He then informed the court that he was paid the money regarding  environmental assessment report after the then Chief Operating Officer (COO) of the CAN 2008 LOC, Magnus Rex Danquah acknowledging that he and M-Pawa Pack pre-financed the report and recommended payment.

Witness told the court that subsequently, the LOC and government set up a date for the bidding process and all participants were expected to meet the "stiff" deadline for the project.

Some of the documents expected to produce for the bidding process, witness indicated include architectural drawings of all the projects and a syndicated funding transaction advice based on which the lead bank would have to be accepted within a time frame, failure to which the bid application will be withdrawn.

Mr. Woyome noted that the time frame provided for the bidding was very short, since he had to do much more maneuvering and work towards securing a provisional permission from the Austria bank to issue a letter of support.

Witness further said he after getting the syndication for the lead bank as well as other relevant documents from MIDA, before the processes were approved for the World Bank to issue the required documents needed with an expiry date of September 2005 for the government of Ghana to accept the offer made.

"The offer letter stated financing based on the World Bank with International Banking Consortium including Bank Austria", witness told the court, adding that he received the "acceptance letter from Bank Austria considering me as an entity."

Mr. Woyome also noted that the acceptance letter indicated the government of Ghana is required to bear cost of fees for the financial engineering obtained for the project.

The court adjourned sitting to May 19, 2014, to enable witness continue with his evidence.

Mr. Woyome is facing charges of defrauding by false pretence and causing financial loss to the state to the tune of over 51 million Ghana Cedis, and has been on trial for over two years.

He had pleaded not guilty and he is currently on bail.

It is the case of the State that Mr. Woyome, on February 2010, made a false representation that Government owed him two per cent of €1,106,470,587 for his services of providing financial engineering for the rehabilitation of the Kumasi, Accra and El-Wak stadia, ahead of the 2008, African Cup of Nations tournament.

The embattled businessman, Mr. Woyome, then obtained GH¢51, 283,480.59 in judgment debt, but the state contends the payment was obtained fraudulently.