I would have jailed Woyome if I were military ruler – Mahama 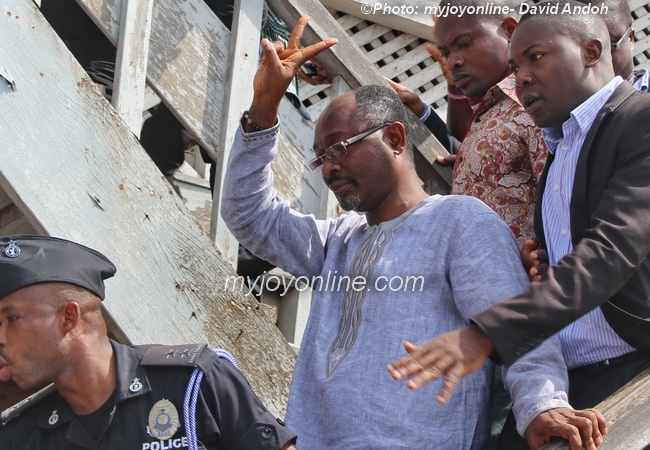 President John Mahama says businessman Alfred Woyome has not been incarcerated because of the democratic system of governance being practised in Ghana.

But for the democratic dispensation, Mr. Woyome would be languishing in jail for fraudulently benefiting from a È»51.2 million judgment he obtained from the state, the president indicated in an interactive session with the media on Tuesday, January 12, 2016 at the Flagstaff House.

Mr. Woyome was ordered by the Supreme Court in July 2014 to refund a total of È»51.2 million judgement debt payment he received between 2009 and 2010.

He subsequently entered into an agreement with the Attorney General to enable him make repayment in installment. He promised to pay the amount latest by December 2015.

However, there has not been any record of him paying any amount to the state as many doubt the state’s commitment to retrieve that money. The president on two occasions directed responsible state institutions to ensure that the money is paid back to the state, but that has not been heeded.

A resident of the Hohoe Zongo in the Volta Region, a week to the end of Woyome's self-imposed deadline to pay the money, brought a case at the Supreme Court challenging the jurisdiction of the court to hear the case. Abdulai Yusif Fanash Muhammed is in court challenging the decision of the Supreme Court asking Mr. Woyome to return the 51.2 million cedis to the state.

Curiously, in response to a question from host of Joy FM’s Super Morning Show, Kojo Yankson as to why the state seems to be disinterested in retrieving the money and yet imposing tax after tax to raise funds, the president blamed the situation on democracy.

President Mahama noted that one “cannot be an adherent of constitutional democracy and an admirer for arbitrary justice. There is due process”.

“I was speaking to one of my colleague head of state and he said something very instructive. He said when 'I was a military ruler, I just arrested the people, they were guilty until they proved themselves innocent'. He said, 'but today as a civilian ruler, one, I can arrest them, but even when I arrest them, they are innocent until I prove them guilty.'

“That is democracy, we can’t eat our cake and have it….if we did not have the constitution and I was the head of the military government I would have gone and grabbed the guy (Woyome) and locked him up until he is proven innocent but you must go by due process, you must follow the law,” President Mahama pointed out.

He noted that the Attorney General was about issuing the “fi. fa. on Woyome” today January 12, 2016, (two years after judgment was given by the Supreme Court for the money to be collected), when Abdulai Yusif's suit challenging the ruling was served on the A-G. A fieri facias, usually abbreviated fi. fa. is a writ of execution after judgment obtained in a legal action for debt or damages for the sheriff to levy on goods of the judgment debtor.

Critical questions remain as to why the government waited for years only to cite Abdulai Yusif's case as a reason it cannot retrieve the money from Woyome, considering the fact that plaintiff (Abdulai) has not sought and obtained a stay of execution from any court preventing the government from enforcing the July 29, 2014 ruling of a review bench of the Supreme Court.

A few minutes after the president's comments, private legal practitioner, Samson Lardy Anyenini posted on his Facebook wall, "We proceeded to appoint EC boss despite being served with the Richard (Dela) Sky's writ which is still pending. Has WOYOME guy filed or obtained an order of Stay of Execution? Don't wish you were a military leader to arrest this guy. Let the A-G do her job and file the execution process to collect the money after all this while. A private firm would never have deferred to a certain promise to pay in Dec 2015."