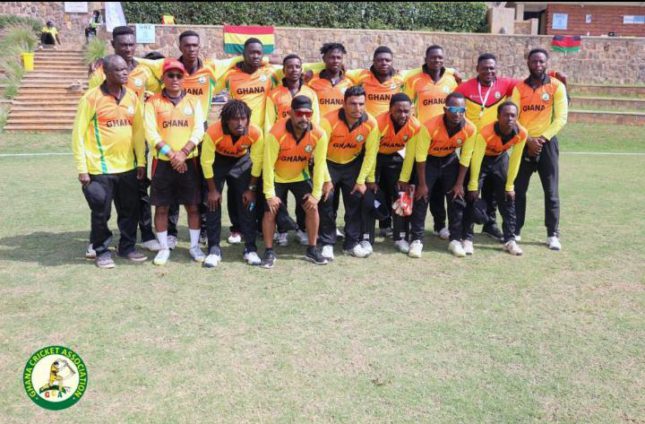 The senior national cricket team, who shared a group with Uganda, Eswatini, hosts Rwanda, Lesotho, Malawi and Seychelles, seemed to be a team on a mission ploughing their way to the top of the table.

They exuded dominance and commanded fear till they met Uganda in their final game of the competition. Prior to that encounter, Ghana was five-out-of-five in all games and were brimming in modest confidence.

Speaking to Joy Sports in an interview, vice-president of the Ghana Cricket Association, Oscar Provencal, indicated that association was proud of the team’s output in Rwanda and expressed desire to see the team secure a T20 World Cup berth.

“The boys have done exceptionally well and we are excited. Psychologically, the boys are prepared and we as an association have to put up extra measures to push them there. We hope that we will qualify from the group,” Mr. Provencal said ahead of the game versus Uganda.

Ghana eventually fell to Uganda and lost their winning streak. However the team’s performance over six games was more than impressive.

Ghana’s five-game winning streak was ignited after the team beat hosts, Rwanda on the first day of the ICC T20 World Cup qualifier. The game took place at the Gahanga oval.

Obed Harvey struck a wonderful partnership with Devender Signh, totaling 101 runs. The team indeed left it late, piping Rwanda’s score of 153-9 by ending the game with a score of 157-5.

Later that day, Ghana overcame competition from Seychelles, beating their East-African counterparts 96-1 to 95-10.

Following their two victories in a single day, Ghana sat first on the table with four points.

The following game saw Ghana bat first versus Lesotho, after winning the toss. Amoluk Signh and James Vifah were Ghana’s first batsman pair, and they combined for 43 points before Amoluk was caught out.

Captain, Obed Harvey, Rexford Bakum, Moses Anafie and Devender Signh were Ghana’s next batters in that game. By the final over, Ghana had recorded a score of 239-5.

Lesotho, who took their turn at batting after fielding first, could only manage to score 123-10, meaning Ghana won by 116 runs.

Rexford became Ghana’s third player to win player of the match, after Samson Awiah and Kofi Bagabena. The day ended with Ghana extending her stay at the top of the table with six points.

Anefie became Ghana’s fourth player to win player of the match at the competition, after Ghana recorded their fourth straight victory in the tournament.

Unlike the game against Lesotho, Ghana chose to field first after winning the toss. Meaning Malawi had the first shot at batting, and managed to make 95 runs with 120 balls.

Therefore, Ghana needed to make only 96 runs from 120 balls to maintain top spot, and they did just that. After the final over, Ghana managed 96 runs, winning the game 96-3.

The win meant Ghana extended their lead atop the table with eight points. Uganda, who had played a games less, were following closely behind with six points.

The next test for Ghana was waiting in Eswatini at the IPRC Kigali Oval.

The game against Eswatini did not go exactly as planned for Ghana, as captain, Obed Harvey, sustained an injury. With the game in the second innings, a fast-approaching ball managed to find its way through Harvey’s helmet, and hit him in the face.

Despite the injury, Harvey was awarded the Player of the Match award, with his bowling figures of 3-12 forcing Eswatini to underperform in the 1st inning.

Ghana beat Eswatini with a single run, recording 75-3 after taking their batting turn. Ghana’s lead was extended after gaining 10 points in five games.

The future of the group was however dependent on the outcome of the game between Ghana and Uganda – the only two teams who were yet to lose a game in the competition.

Fortunately for Ghana, Obed made a timely recovery ahead of the encounter. The Gahanga Oval hosted the encounter which had Ghana’s World Cup dreams on the line.

Unfortunately, both the World Cup aspirations and winning run were thrown to the dogs, with Ghana falling to the Ugandans.

Uganda were the first team to bat and after the first inning, they boasted a score of 176-6. That meant Ghana had to make at least 177 runs to win.

It was a demand Ghana ultimately fell short to. The team managed only 97 runs, losing by 79.

Uganda with a game in hand, overtook Ghana after ending their winning streak and also gaining 10 points in the process.

However Uganda’s qualification is not concluded, and pending results in their game versus Eswatini on October 22.

A win will see Uganda book a spot to the T20 World Cup over Ghana. However should they fail to win, Ghana stands a chance at qualification off the back of the net run rate (NRR).

Nonetheless with Eswatini sitting last but one on the table with only two points, it seems like Ghana’s world cup ambitions are well and truly dashed.