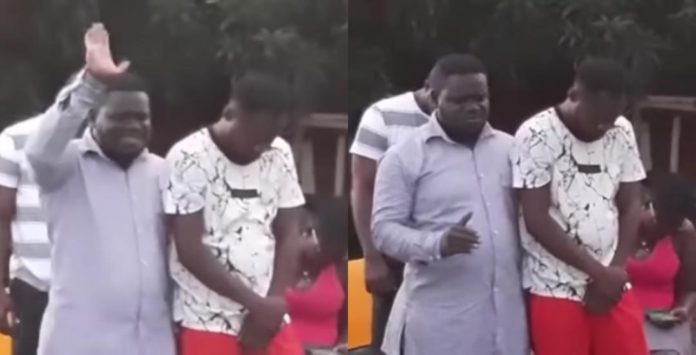 Some members of the International Central Gospel Church (ICGC), Christ Temple at Abossey Okai held a prayer service for comedian Funny Face in his home on Monday.

The visitors included actor Adjetey Annang and the Dramatic Arts Ministry of the Church, a group Funny Face once belonged to.

In the videos posted to his Instagram page, the members had gathered around to pray for the actor.

This follows several calls on social media for support for the actor. Funny Face’s outbursts on social media have attracted the concern of many Ghanaians who suspect that the comic actor may be suffering from either a mental or emotional breakdown.

Funny Face has been in a public feud with Vanessa, the mother of his children and her family. In addition to that, he has also accused some of his colleagues in the industry of trying to sabotage his career.

Kumawood actor, Kwaku Manu in an Instagram post recently, urged family and friends of his colleague to hold Funny Face up in prayers, especially after he threatened to commit suicide.

This prayer session in his home is in response to these concerns. The group not only prayed for the comedian but were seen in the video sharing a bowl of fufu with him.

Funny Face said he was thankful for the ministry’s visit and for reminding him how far the Lord has brought him amid all his struggles.