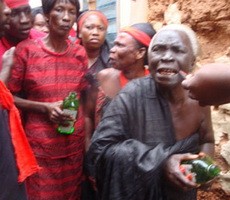 An 80-year-old woman whose grandson was shot dead by the police at Sepe Timpom in Kumasi on Saturday, has invoked the spirit of the dreaded ‘Antoa Nyamaah’ river goddess and about 10 other river deities to strike dead the IGP, Paul Tawiah Quaye and other top police officers.

With the aid schnapps, pepper and eggs, Madam Yaa Serwaa also prayed the river gods to kill the Ashanti Regional Police Commander, DCOP Augustine Gyenning and two policemen of the Buffalo Unit in Kumasi, who are believed to have shot her grandson, Kwaku Asante, 26.

Madam Serwah claimed that her grandson was not a criminal therefore the police erred by shooting him dead in public without justification, hence her decision to invoke the spirits of the several river deities to take revenge.

She insisted that the killers of her grandson did not deserve to live, adding that similarly, the IGP and the Ashanti Regional Police Commander should die because the rot occurred under their watch.

In tears, Madam Serwah said she decided to curse the police officers because her family’s reputation had been ruined by the police’s claim that Kwaku Asante was an armed robber.

The old lady was willing to offer the wives and children of the two policemen that allegedly killed her grandson to the river deities to show appreciation if they killed the top police officers.

Madam Serwah said because she was very poor, she was not financially sound to make the issue a legal one, hence her decision to seek the intervention of the river deities.

Several residents of Sepe Timpom also joined in invoking the river spirits, using eggs and schnapps, to kill the killers of Asante.

Prior to the invocation of the river deities, brother of the deceased, Pastor Prince Appiagyei Brempong, called for the immediate resignation and prosecution of the Ashanti Regional Police Commander, DCOP Augustine Gyenning.

He claimed the police chief’s negligence resulted in his subordinates storming Sepe Timpom in a Hollywood fashion to shoot dead Kwaku Asante, who had done no wrong, stressing, “the police commander is not fit to occupy his office.”

Pastor Brempong, addressing the media at the family house Wednesday morning, urged the police hierarchy to expose the two policemen that shot dead the deceased so that the law would deal with them.

He enquired why the police, after labelling Kwaku Asante and his three friends as criminals and arresting them on Saturday evening, freed them instead of taking them to court, insisting that the police had killed an innocent boy.

The assemblyman of the area, Anokye Frimpong, who claimed to have witnessed the gruesome murder of Kwaku Asante on Saturday evening, described the police service as “a bunch of liars” that could not be trusted.

He claimed that the Ashanti Regional Police Command, led by DCOP Gyenning, on Tuesday during a meeting with the bereaved family, admitted shooting dead an innocent person and begged for pardon.

Mr. Frimpong said he was surprised when he later heard DCOP Gyenning stating to the press that Kwaku Asante was an armed robber so the police did nothing wrong by killing him.

He insisted that he was present when the police stormed Sepe Timpom in a brutal fashion and started firing shots at all angles, disclosing that his plea to the police not to shoot Kwaku Asante fell on deaf ears.

Earlier on, residents of Sepe Timpom, including women, men and children, hit the streets of the town clad in mourning colours while chanting war songs and heaping curses on the police.

The demonstrators, who hit the street as early as 6:00am, blocked the main street of Sepe Timpom, preventing the free flow of vehicles and bringing all activities in the area to an abrupt halt.

They held placards, some which read “the police at fault,” “he is innocent,” “a poor boy had been killed” and “the police cannot be trusted” as they marched from one end of the street to the other.

Meanwhile, when the Deputy PRO of the Ashanti Regional Police Command, Corporal Godwin Ahianyo, was contacted to react on the issue, he answered that he had “no comment.”