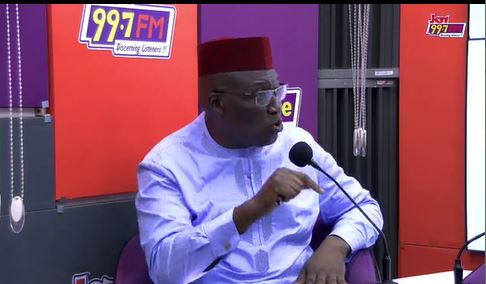 The Chief Executive Officer of Dalex Finance, Kenneth Kwamina Thompson, says while the Statistical Service pegs Ghana’s inflation rate at 33.9%, for him it feels more like 80%.

He explained that the cost of basic things, particularly food items, have since January inflated above 80% and there is no sign of it slowing down soon.

This, he says, has placed undue burden on his pocket and that of ordinary Ghanaians.

Speaking on JoyNews’ PM Express Business Edition, he said, “They say inflation is what, 33.9%? In my pocket it feels more like 80%.I mean if you take the cost of basic things – frozen foods January 2022 120 cedis, now it’s 250 cedis, that is 108% increase. That is frozen foods, frozen chicken.

“Royal Aroma Rice 5kg 32 cedis to 58cedis, 81% increase. Frytol, 15 cedis to 30 cedis, that is an 88% increase. The things I haven’t asked is pure water, salt, pepper, tomatoes. So inflation is for me, in my pocket, and I’m not disputing what the statistical service has, in my pocket it is more like 80.

“And then you know, for us as a company, we pay for our IT services, most of them are in dollar rates … and that has almost doubled. So for me in my pockets that is over 80%.”

Ghana’s annual inflation rate accelerated for the 15th straight month to 33.9% in August of 2022, from 31.7% in July, but below market forecasts of 34.3%. It was the highest reading since August of 2001, even after Ghana’s central bank delivered a record 300bps rate hike during an emergency meeting in August.

Speaking concerning the situation, Mr. Thompson noted that the rise in inflation and the subsequent plummeting of the cedi have had a rather devastating effect on businesses.

He noted that due to the fast eroding purchasing power of Ghanaians, fewer people are now able to engage the services of businesses, thus leading to drastic falls in revenue.

He also added that the case of hiked interest rates means that now either businesses that need funding cannot go for it or when they do it is too expensive, thus causing more problems.

DISCLAIMER: The Views, Comments, Opinions, Contributions and Statements made by Readers and Contributors on this platform do not necessarily represent the views or policy of Multimedia Group Limited.
Tags:
Dalex Finance
Inflation
Kenneth Kwamina Thompson