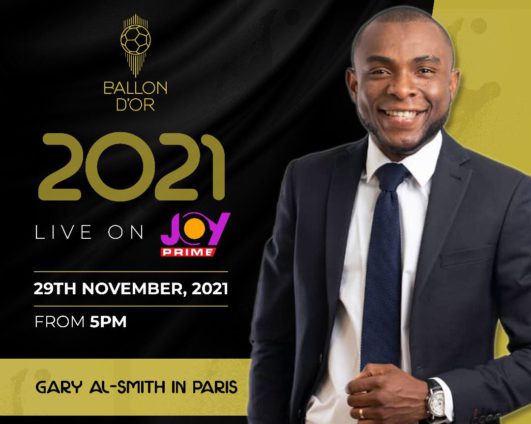 Paris, November 29 – You’d think a boy from the coast of Ghana, where it can get cold, would fancy a bit of chilly weather as par for the course.

This three-degree malarkey is not it. But who cares about cold when there’s the most prestigious international football awards gala heating up in a few hours? This year’s is special primarily because it is probably the first time anybody can remember (alright, that’s an exaggeration – maybe in the last decade) that those two guys aren’t roaring favorites on their own.

Cristiano Ronaldo has already given notice that he will not be here, perhaps in the knowledge that he will not win. Lionel Messi has sported a new shave which, observers have noted, he also did when he last won. Coincidence? Robert Lewandowski is coming with a full armada of Bayern Munich and Polish national team henchmen supporting him, as he is no doubt aware this is best chance of winning the gong.

All this has led to a frenzied rumour mill ahead of tonight’s show – which will be live on Joy Prime from 1700 GMT.

France Football, organisers of the Ballon d’Or, have not had an easy few weeks. Between swatting repeated reports of leaks claiming who the winners are and getting everything in place in time for tonight’s event with a pandemic hovering, they’ve been busy.

However, there is a determination to scale this year’s hurdle by having a grand event at the Théâtre du Châtelet.

Pro- Messi supporters have said for weeks that their man has been told the men’s award will be his for the seventh time, despite a challenging year where winning the Copa America stood out. Of course, his goal and assists tally have been decent – they always are. But by his own otherworldly standards, Messi has not been dizzyingly good.

Which is where Rob Lewandowski comes in. Having been an outright favorite to annex the main award last year, organisers threw a curveball by announcing that the pandemic did not give a level playing field to all, and hence, suspended the awards. This year, the Polish forward has not let up, being in devastating form as usual. The only blight is that his national team crashed out at the group stages of the Euros. Otherwise, has his year been good enough to take the accolade?

Besides these two, the biggest cheers emanate from the camps of Karim Benzema and Jorginho. Karim has no club titles, but has been in obscenely good form for Real Madrid. In this day when everyone is crazy about numbers, it is not just his numbers, but how he rallies his team from the front.

And yet, his numbers are magic too. He has 11 goals in14 La Liga games, and 7 assists – both are league highs. He almost single-handedly dragged France to the Nations League trophy in that final against Spain. What else? Well, he’s been pretty much untouchable.

Jorginho is hoping for what I call a Cannavaro year – where his individual stats will not be as good as his competitors, but he can be rewarded for having been a very good footballer who has won a slew of titles for nation and club – the Euros, the Champions League and the Super Cup.

There’s a sense that the awards are at a historic moment, where it gets ready for the post-Messi-Ronaldo era. Would subsequent winners after the duo have gone be able to match up to their insane numbers?

Just as I prepped my notes for the day, I got a notification that Netherlands and Arsenal striker Vivianne Miedema has been named BBC Women’s Footballer of the Year 2021.

A curious thing, considering that feeling here is that Women’s Footballer of the Year will likely go to someone from Barcelona and Chelsea, who look set to dominate women’s football for the coming years. “Female players are now idols,”

Paris Saint-Germain’s first-ever domestic league win also means there are no shortage of eligible contenders for the women’s 2021 Ballon d’Or.

Didider Drogba, who came close to winning the award in 2007 (he came fourth, but that’s still close, no?) will be the event’s host, together with French football journalist Sandy Heribert.

The red carpet begins at 1750 GMT, but Joy Prime will begin its live TV broadcast from 1700 GMT.

While Drogba will be helming the international feed out of France, Nathaniel Attoh, Hans Mensah-Andoh and George Addo Jnr will be straddling the local coverage from the Joy Prime studios in Accra. Online, this website will be carrying major updates while the Joy Sports Twitter account will also be providing photos, video and text updates.