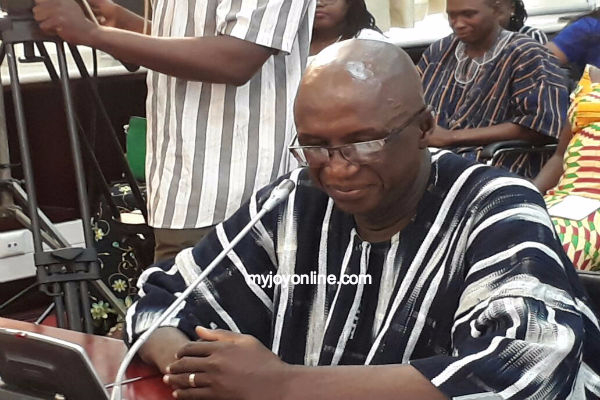 Interior Minister, Ambrose Dery, has apologised for the assault on three Ghanaian Times journalist by a group of police officers in Accra last week.

“On behalf of my Ministry, I want to apologise for whatever actions of those in my sector agency might have done to you…it is in the spirit of the President to push the frontiers of free expression and that is the only way we can progress as a nation,” he told the media, Wednesday.

The two journalists, Malik Sulemana and Raissa Sambou together with their driver were assaulted by a Policeman with the help of 10 other men in uniform.

This was after the officer jumped a traffic light and ran into their vehicle.

There has been condemnation from many quarters of the act, which some have described as an attack on media freedom.

Raissa Sambou, a lactating mother was rushed to the emergency unit of the Ridge Hospital

Commissioner of CHRAJ, Joseph Whittal says the police must use the Ghanaian times incident to rid their ranks of unprofessional men in uniform.

“I am very certain that the police high command will want to clean their image and so for this to happen a day or two after the Short Commission submitted their report to the president, is worrying. Don’t forget it was all about police-civilian relations and even though the findings of the report are not known, we all saw what transpired,” he said.

According to Mr Whittal, the Service should take a cue from what happened at the Commission and begin to clean its image by ensuring that errant officers are properly investigated and not covered by the Police Intelligence and Professional Conduct Investigations.

He wants police officers who misconduct themselves to be “properly put before the court and prosecuted just like every other citizen because they are not above the law.”

Joseph Whittal is the CHRAJ boss

As the New Time Corporation files a report to the National Media Commission (NMC) and the Information Ministry on the assault on their journalists, there are calls for a more drastic action to deal with issues of assault on journalists.

In another incident, a driver and his mate physically assaulted a police officer who pursued them after the driver of the bus they jumpd red light. The two are currently standing trial.

The Interior Minister says government is working at equipping the Service to curb such incidents.

According to him, last week’s incident would not have occurred if the police officers had the requisite equipment to track motorists who flout road traffic regulations.

He said government is working on providing the Police Service with communication equipment so they do not have to chase offending motorists.

Mr Dery explained that with the communication equipment, the officer only needs to place a call on the device and all the police officers on duty will have the registration number of the offending driver’s vehicle and stop the vehicle.

“Because we are still struggling to get them sufficiently equipped, some of the moves they make put them in harm’s way because we haven’t equipped them properly.

“When we get to where we want to get to, thanks to the president’s commitment, we won’t even need videos because the uniform the police will wear will tell us what they have been up to the whole day,” he said.