Investors have free hand to do business – Prez 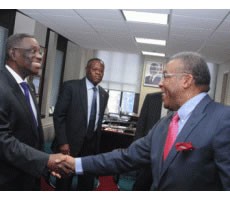 President John Evans Atta Mills has assured that KOSMOS Energy and other foreign investors in the country that they will be allowed to do business in Ghana without any impediments.

At a meeting with the Chairman of the KOSMOS Board of Directors, Mr John Kemp in New York, the President said the government would not deny KOSMOS the opportunity to expand its operations in Ghana.

He admitted that there had been some outstanding issues between the government and KOSMOS but assured Mr Kemp that the issues will be resolved with speed.

“I have asked my Energy Minister to resolve all outstanding issues without delay, ” President Mills said, adding, “I want the issues resolved immediately so we can move away from the past and develop a new win-win relationship”.

“I am here in the US because I know that this is the time that important decisions for next year are being taken by big corporate bodies and I need to position Ghana positively on the mind of the investor community”, he added.

President Mills expressed appreciation for the bold step KOSMOS took in investing heavily in Ghana’s oil find and said he would ensure that the success story of KOSMOS spoke volumes about the investment climate in Ghana.

The President said he knew that KOSMOS and its partners should be producing about 120,000 barrels a day and that nothing should stop that target from being met.

For his part, Mr Kemp thanked President Mills for the assurance and promised to convey the news to the board of the company.

According to him, KOSMOS intended to inject billions of dollars into its Ghana operations next year and expressed appreciation for the President’s personal intervention in allowing the company’s investment in Ghana’s oil industry to find new grounds.

He also made the point that a few things may not have been done properly in the past and assured President Mills that KOSMOS also intended to move its relationship with Ghana to greater heights.

“It is very good of you to be here in person during this festive season to assure KOSMOS of a brighter future with Ghana because the board will be meeting to take major decisions for next year and your presence and reassuring words will factor significantly in our plans for the coming year”, he noted.

Mr Kemp asked President Mills to make monthly visits to the New York Stock Exchange because his presence there two weeks ago had boosted KOSMOS’ share price on the market.

“Maybe you should be visiting the New York Stock Exchange more frequently so our shares can continue to rise,” Mr. Kemp stated.

Responding, President Mills said that the opposition New Patriotic Party would make an issue out of such monthly visits to New York but reiterated that he has no regrets being in New York during this period to make sure that he finishes unfinished business before the end of year.