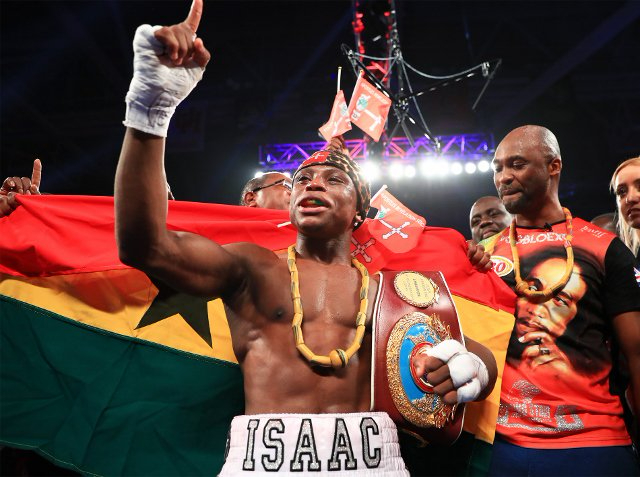 "We are very, very happy to announce that we have signed Isaac Dogboe to a co-promotional agreement with Rising Star of Africa," Top Rank chairman Bob Arum said. "This is a long-term agreement and together with (trainer and father) Paul Dogboe and (adviser) Mike Altamura, we will afford Isaac opportunities to win championships in multiple divisions."

Terms of Dogboe's deal, which was not unexpected, were not announced but Altamura told ESPN that it was a multi-year deal with a minimum of three fights per year.

Arum added that he would soon visit Ghana and explore the possibility of having Dogboe defend his title at home in 2019. When Dogboe boxed in Accra, Ghana, in January, and knocked out Cesar Juarez in the fifth round to win an interim title, he drew a large and raucous crowd.

"I am looking forward to strengthening my relationship with Bob Arum and welcoming the Top Rank team to Ghana next year," Dogboe said. "I am happy to be part of the Top Rank family. This only strengthens our relationship, and I am excited about making history together."

In the fight after he stopped Juarez, Dogboe (20-0, 14 KOs), 24, traveled to Philadelphia in April and won the full 122-pound title in a fight of the year contender. He survived a first-round knockdown and rallied to drop Jessie Magdaleno twice and knock him out in the 11th-round.

On Aug. 25, Dogboe made his first title defense and scored an electrifying first-round knockout of Japan's Hidenori Otake in Glendale, Arizona, on the undercard of Jose Pedraza's lightweight world title win over Raymundo Beltran.

Dogboe's first fight of his new deal will come on another card featuring Pedraza. Dogboe is slated to make his second title defense against an opponent to be determined on the undercard of the Vasiliy Lomachenko-Pedraza lightweight world title unification fight on Dec. 8 (ESPN and ESPN Deportes, 9 p.m. ET) at the Hulu Theater at Madison Square Garden in New York.

"We're looking at the highest available contender," Altamura said. "Currently I have Paul reviewing some tape of potential opponents."