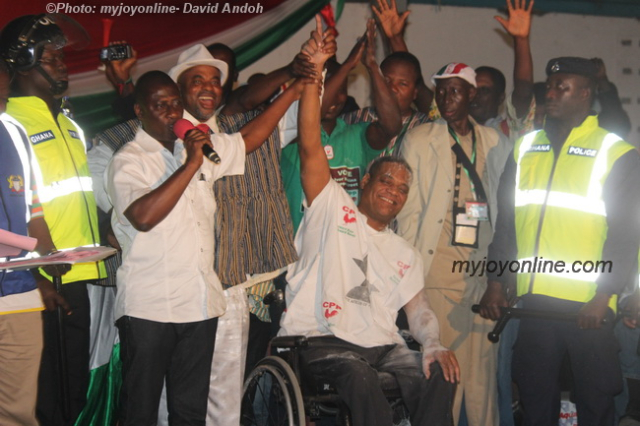 Joy News Latiff Iddrisu who is at the International Trade Fair Centre in Accra where the elections took place reports Mr Greenstreet won at three out of four polling stations in an election that was tipped to go in favour of former Party Chair, Samia Yaba Nkrumah.

Over two thousand delegates of the party from all ten regions of the country converged at the International Trade Fair Centre in Accra to select a presidential candidate for the 2016 presidential polls.

The National Delegates Congress of the party, the highest decision making body, Saturday also made key amendments to the party’s constitution.

The CPP congress resolved that the National Youth Organiser slot of the party will now be elected at the National Delegates’ Congress along with other high profile positions such as the presidential candidate.

In the past the CPP held a separate event to elect the party’s National Youth Organiser and another to elect a flagbearer.

The second amendment by the congress concerns eligibility of flagbearer aspirants.

In the past Presidential aspirants would have to be party members for 4 years before qualifying to contest the position.

The final amendment to the constitution by the CPP is a resolution to unite with other Nkrumaist parties, notably the Peoples’ National Convention (PNC). This amendment, according to the National Chair of the party Mr. Edmund Dele, would be closed in April this year.