Jamie Vardy hit a hat-trick as Leicester City found form to thump Manchester City 4-2 and leave Pep Guardiola facing suggestions his side are in crisis.

England forward Vardy ended a 741-minute run without a Premier League strike with the opener before adding a second on 20 minutes after Andy King had curled in from distance.

Vardy then completed his treble in the second half thanks to a howler of a backpass from John Stones before an Aleksandar Kolarov free kick and a smart finish from Nolito reduced the arrears late on.

Claudio Ranieri's men had gone into the contest just one point above the drop zone with many questioning whether the champions were set for a long battle with relegation, but they gave a sharp riposte as Guardiola and co were left shell-shocked. 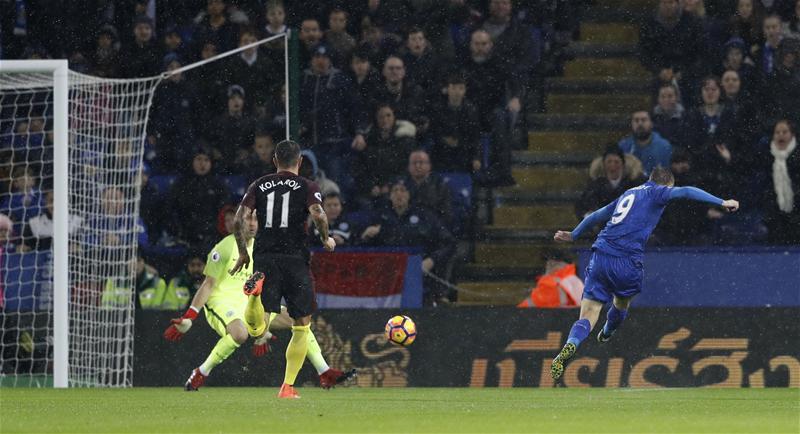 With the Champions League now off the agenda until February, the hosts finally found last season's league form and the manner in which they went about securing this result suggests they are fully focused on improving their fortunes on the domestic front.

In stark contrast, the visitors have now kept just one clean sheet in 17 games and all the talk of crisis will be being directed at Guardiola post-match as his team's defensive deficiencies continue to be brutally exposed.

It leaves Man City in fourth spot, four points off first-placed Arsenal with the possibility they could fall seven points adrift of the leaders, if Chelsea win at home to West Bromwich Albion on Sunday.