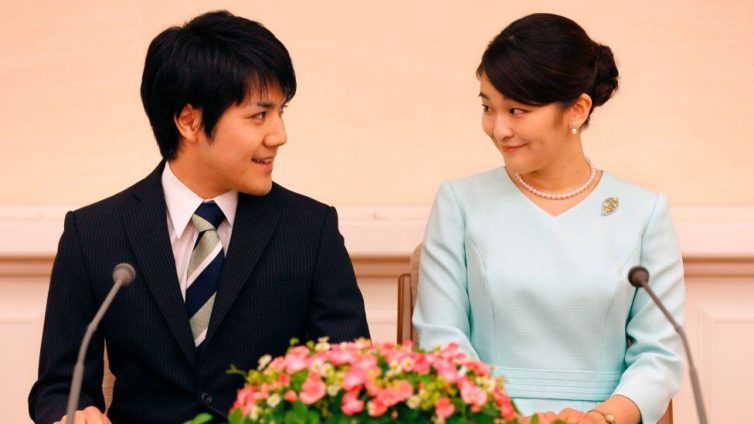 Under Japanese law, female imperial family members forfeit their status upon marriage to a “commoner” although male members do not.

She also skipped the usual rites of a royal wedding and turned down a payment offered to royal females upon their departure from the family.

She is the first female member of the royal family to decline both.

The couple are expected to move to the US – where Mr Komuro works as a lawyer – after marriage. The move has drawn inevitable comparisons with British royals Meghan Markle and Prince Harry, earning the newlyweds the nickname “Japan’s Harry and Meghan”.

Like Ms Markle, Mr Komuro has come under intense scrutiny since his relationship with Ms Mako was announced. He was most recently criticised for sporting a ponytail when he returned to Japan.

Some felt his hairstyle was unbecoming of someone set to marry a princess.

Princess Mako left her Tokyo residence at around 10:00 local time on Tuesday (01:00 GMT) to register her marriage, bowing several times to her parents, Crown Prince Fumihito and Crown Princess Kiko. She also hugged her younger sister before she left, news outlet Kyodo reported.

The couple are expected to hold a news conference later on Tuesday where they will make a brief opening statement and give written answers to five selected questions that were submitted in advance.

This is because the princess “feels a strong sense of anxiety” about having to answer questions verbally, said Japan’s Imperial Household Agency (IHA).

There has been excessive media coverage around the couple over the years, which has caused the princess to suffer from post-traumatic stress disorder, the IHA had earlier said.

Her relationship has been met with controversy in the country.

She became engaged to Mr Komuro in 2017 and the two were set to wed the following year. But the marriage was delayed following claims Mr Komuro’s mother had financial problems – she had reportedly taken a loan from her ex-fiancé and not paid him back.

The palace denied the delay was linked to this, though Crown Prince Fumihito said it was important for the money issues to be dealt with before the couple got married.