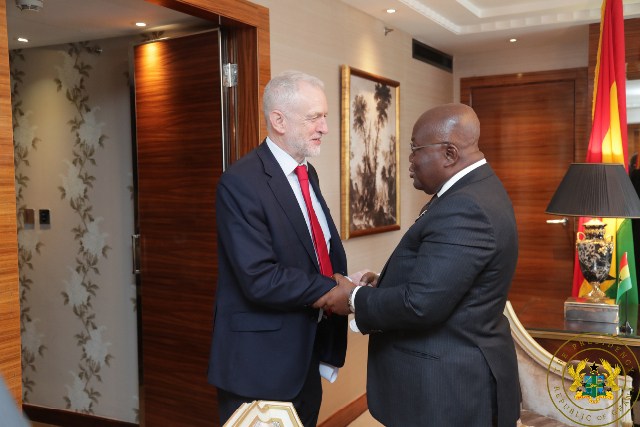 Leader of UK’s Labour party Jeremy Corbyn is expected in Ghana next week on a fact-finding mission, British media has reported.

It will be the Labour leader’s second meeting with the President after an April 2018 encounter in the UK ahead of the Commonwealth Heads of Government meetings.

In that meeting at the Labour leader’s office, the two talked post-Brexit bi-lateral trade, reforms in the Commonwealth and UN and the role of the African Union and US forces in Africa.

While in Ghana, Jeremy Corbyn will also meet leaders of the opposition National Democratic Congress which is a member of Socialist International.

The NDC General Secretary Johnson Aseidu Nketia is Vice President of the Socialist International (SI) of which the Labour party holds an observer status.

The Sun and DailyMail reported, the UK party leader’s trip to Ghana is not without criticisms. Some Labour MPs reportedly want to see Corbyn negotiate with other MPs and parties to strike a deal over the thorny issue of Brexit.