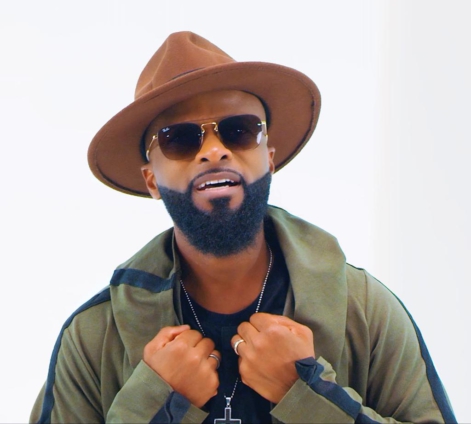 The artiste, who recruited renowned Ghanaian gospel musician Dinah Hammond for the beautiful piece, said his life journey inspired him to write the song.

Produced by Jmorg, the 5-minute visuals for ‘Kese’ captures the beautiful landscapes in Accra in the music video, a concept he describes as outstanding in frame.

In an interview, the US-based gospel musician said coming from an “underprivileged” home as a young boy in Ghana, he struggled to keep up in life until he was saved by grace.

I remember growing up in Madina life wasn’t easy at all. I had to carry my own chair and table to school. I hawked from Madina to Kotoka to bring money home for upkeep. I have been a shoemaker, selling beans and fried plantain. Selling kerosene and even used clothes. I have done it all and to top it all I encountered a fatal accident in USA which no one thought I could have survived but as a Christian I cannot say nothing but God. This is what inspired my new song,” he said.

Jesse Morgan further disclosed that, he used to be in the same church-singing group with Dinah Hammond, adding that, “we’ve been good friends for years.”

“I went for Diana Hammond because she is the right person for this song and we have been friend for ages. We used to sing together when I was in Ghana and we were both in the same church. Assemblies of God, Madina Adenta branch. We were also together in a music group.”

The gospel minister has worked with many international artistes such as Israel Houghton, Micah Stampley, Donnie McClurkin and Tye Tribbett yet he said he’s open to work with any versatile musician who fits the slot.

Jesse Morgan doesn’t describe himself as a contemporary artiste, per his craft, he said he cuts across all genres if only the subject and theme of the song preaches and inspires followers of Christ.

“Even though many aspects of the songs were produced in Ghana. I wanted the video to appeal to people of all backgrounds because the gospel of Jesus knows no colour or creed.”

“I wouldn’t say I am a contemporary artistes because I do more. I can sings songs like Yaw Sarpong, that style. country music or even sing like elder Mireku or go local you name it. Whatever I put my mind to put I can do it,” he explained.

Talking about his challenges, Jesse Morgan said the lack of financial support makes it difficult to keep up with his craft but he is apt to hold his own musical concert soon in Ghana.

“One of my biggest challenges will be financial support. Everything I have done has been through my little money and to be very successful it all takes money. I will like to use this platform to appeal to any sponsor in my music industry. I am planning to have my own concert this year or early next year.”

Jesse Morgan urged believers to patronise his Kese song and believe God has a unique way of uplifting those who are broken-hearted.

“God has a plan for each and every individual on planet earth. We just need the appointed time. Whatever God has spoken about your life will come to pass. Do not cut corners in your preparation because it would not last,” he said.