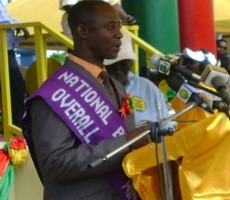 The 17th edition of the National Best Teacher Awards which coincided with the World Teachers Day on Wednesday October 5, has been held in Takoradi with Joshua Amankwah Otu, emerging as the best teacher for 2011.

Mr. Otu, 52, has thought at the Garden City Special School in Kumasi for 23 years. He was presented with the design of a three-bedroom house to be constructed at a location of his choice, a laptop and a computer with accessories for his school.

The first runner up is Georgina Aglobitse of the University Practice primary in Cape Coast, Central Region, who received a Double-Decker Pick Up, a laptop and a computer with accessories for her school.

Mrs. Sedinuam Abochie of Soda Domeabra primary in the Afram Plains in the Eastern Region was the 2nd Runner up. She received a saloon car, a laptop and computer with accessories for her school.

The Best Teacher told Maxx news in an interview that although he was excited, there is the need for Government to pay attention to special education else it could lose its human resource due to lack of motivation.

The 2nd Runner up Mrs. Sedinuam Abochie in a very excited mood, urged her colleague teachers particularly women to accept to teach in deprived areas, saying if she had rejected her posting to a rural area, she would not have been rewarded.