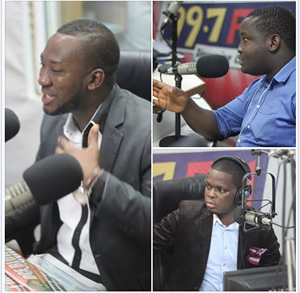 Folks, it's Friday. Time to look back on the week and take stock of all we've learnt from our guests on the Super Morning Show.

Monday was #BringBackAyariga, as the Minister for Youth and Sports joined us for a quick catch-up on some of our controversial youth initiatives. We discovered that the minister had no idea whether the YES Fund was a grant or a loan scheme. He also had no idea who was in charge of it. Yes, this is indeed a scheme that falls directly under the purview of his ministry, but that didn't stop him from not having the foggiest idea how it worked, or who was in charge. Until someone from the Presidency came to his rescue with a text message and some breaking news that Adu-Asare had been relieved of his post, and replaced by Helga Boadi. Meanwhile, we still don't know whether YES is a grant  or a loan scheme, by the way.

Tuesday was a packed day indeed! First, we learnt that Noguchi has tested 98 suspected ebola samples since March. We also found out a great deal about what goes into the actual testing of these samples. Oh, and I wonder if you caught this, but Noguchi buys their PPE at $3 a pop. Slightly cheaper than the $250 being quoted by the company recommended by the Ghana Health Service for hospitals to purchase their own stock from. Someone give the Noguchi supplier's number to Dr Appiah Denkyira, wai.

On Tuesday, we also flipped through the 2012 Auditor General's report. A report which government is yet to act on. Na as for the irregularities dier, plenty! The Nurses' Association has been buying treasury bills with the government funds they were supposed to use in completing a crucial construction project. So the project delays while someone makes a profit by using the government's own money to buy treasury bills from the same government? Ei, Republic ha ay3 d3w papaapa!

As for Wednesday… You know, once in every person's life, you meet someone who makes you question everything you ever thought you knew. For me, that person is Mary Addy. A woman who came this close to killing herself and her two little sons, after the hardships of her terrible life became too much for her tortured soul to bear. All it took were a few words from someone who cared, to save her life, AND her children's. Mary Addy taught me to view suicide and its victims in a truly different way. By the time she left the studio, I had re-mixed every thought I had ever had up until that point. Mary Addy changed my life, and I have a feeling she made quite and impression on you too.

Yesterday was another blockbuster of a day. We discovered that we just might be experiencing a "decrease in the increase" of cholera cases, as promised by Dr Eleeza, of the Greater Accra Regional Health Service. The La General Hospital really helped us understand the reducing figures. But we are certainly not out of the woods yet. This year, 17,000 cases and 150 deaths across a country, means we are not doing something right.

Which brings us to this morning. What would you do if you realised that your partner still kept a tattoo of their ex somewhere on their body? Do you keep old emails and pictures of your ex? Why? How does your new partner feel about it. We will attempt to answer these and many other baffling questions, with my lovely friends from the world of entertainment. And this morning, Reggie Rockstone joins us to get right into it on our Relation Conversation. Plus we have a fabulous unique achiever to introduce to you. So stand by for some inspiration, education and titillation right here on this Fabulous Friday Morning.

My name is Kojo Yankson, and I've got everything you need right here!