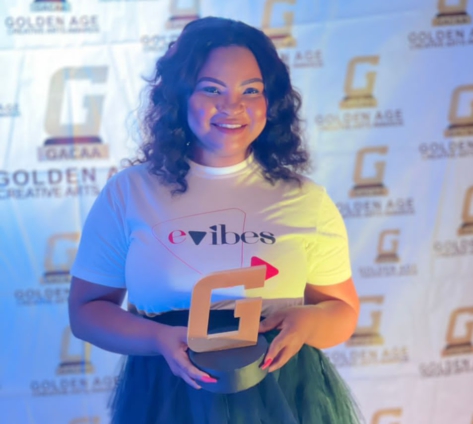 Entertainment journalist with The Multimedia Group, Rebecca Tweneboah Darko, also known as Becky has been honored with two awards at the Golden Age Creative Arts Awards.

Becky was awarded TV Show of the Year – E Vibes and Entertainment Arts And Tourism Show Host of the Year.

The E Vibes host during her acceptance speech expressed her gratitude to the organisers for the recognition and urged the public to make time and watch the latest season of E Vibes show.

“I am grateful to the organizers for this recognition. Thank you to the Multimedia Group for giving the platform and will urge of all you to make time for the new episodes of Evibes which airs on Saturday at 8:30 am just before Newsfile,” she said.

Asempa’s FM Fire lady was also honored at the event. She was awarded Sports Journalist of the Year and Radio Personality of the Year.

Speaking at the event, French Ambassador to Ghana, Anne Sophie Akosua Ave urged Ghanaians to appreciate those “who do behind-the-scenes work” because they play a very critical role in our entertainment industry.

Some of the winners at the event were Entertainment Pundit, Arnold Asamoah Baidoo and French Ambassador to Ghana, Anne Sophie Akosua Ave among others.

The award seeks to honour and appreciate their progress and impact, which have been remarkable over the years.

The Golden Age Creative Arts Awards are held annually to honour personalities who have demonstrated good values, distinguished themselves in their diverse fields of endeavour, and are committed to societal progress.

The award ceremony also honours various nominees across a set of categories based on their achievements within the year under review.

The award categories this year were divided into two sections – the Honorary Awards and the Competitive Awards, which saw winners chosen from a list of nominees based on results of the voting process and was supervised by CasteVote Ghana.

The accolade and prestige honourees get for receiving GACA Awards give the affirmation that winners have outshone the glut.