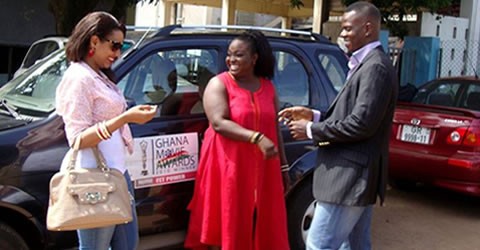 The car which per an agreement was under actress Roselyn Ngissah’s care was handed over to Juliet Ibrahim at a short ceremony which was attended by Prince Tsegah of the Ghana Movie Awards and Roselyn Ngissah in Accra Wednesday.

Interestingly, the four actresses, after the car was presented to them on January 25 at a prize presentation ceremony at the Golden Tulip Hotel, were supposed to agree on how they were going to use the car but failed to reach a consensus.

It was reported that actress Jackie Appiah publicly declared that she was opting out of the use of the car as well as any benefits should the car be sold.

After several weeks of ‘not knowing’ what to do, organizers later agreed to hand over the car to the actresses in turns to help promote the awards, the second edition of which is expected to come off in December 25, 2011.