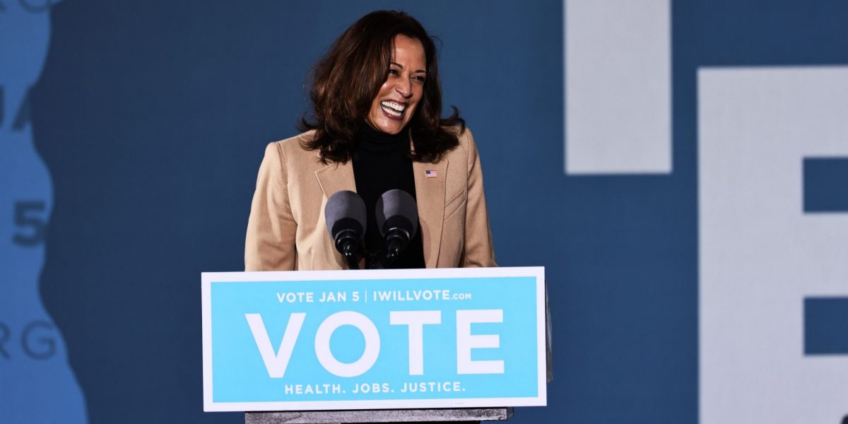 With the Georgia U.S. Senate runoff a day away, major political influencers have swept into the state to sway voters in the crucial followup to the November election, which will determine control of the body.

On Sunday, Vice President-elect Kamala Harris returned to Georgia for a last-minute push to get voters to support for Democratic candidates Rev. Raphael Warnock and Jon Ossoff.

“That is the task before us…and in the hands of you as the voters of Georgia,” said Harris during an outdoor rally in Garden City, a suburb of Savannah.

“To do what is not only in the best interest of the people of this beautiful and great state but by extension what you will do for people all around the country.”

She implored people there to cast their votes for Warnock and Ossoff as well.

“If you take charge of your power, you and the folks in your community can determine the direction of this state and this country,” she said.

“Thousands of people from Savannah to Augusta to Atlanta have already voted, and we’re counting on you to talk with your friends and family about making a plan to vote on Election Day.”

Both senate races in Georgia are very tight and are expected to be close in votes. In polls conducted by FiveThirtyEight.com, Warnock leads incumbent Sen. Kelly Loeffler 49.6 per cent to 47.6 per cent.

According to data from Georgiavotes.com, more than 3 million people have already cast ballots in early voting, which was completed on Thursday. Breakdowns show more than 957,000 voted through mail-in and more than 2 million did so at polling places.

Traditionally, runoff voters in Georgia are older and white and yet, Democratic officials are encouraged by the increased number of African American voters who have participated in early voting.

The push from Harris, Obama, and several celebrities and voter organizations have surely helped to get the word out about the importance of the outcome of this vote to the political future of the Biden-Harris administration.

While Harris and Obama were rallying voters, at the same time, South Dakota’s Republican Governor Kristi Noem came to a rally in McDonough, Ga., supporting Loeffler.

”If we don’t win the Senate seats, the deciding vote in the Senate is going to be Kamala Harris,” Noem said, according to the Atlanta Journal-Constitution.

“We don’t want that individual breaking ties in the Senate on the most controversial pieces of legislation in this country.”

President-elect Joe Biden is expected in Georgia to campaign for the Democratic candidates.

DISCLAIMER: The Views, Comments, Opinions, Contributions and Statements made by Readers and Contributors on this platform do not necessarily represent the views or policy of Multimedia Group Limited.
Tags:
Georgia
Kamala Harris
Michelle Obama