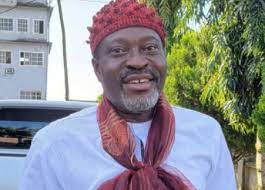 Nigerian actor Kanayo O. Kanayo has revealed that he had once attempted suicide as a young boy.

In an interview with Vanguard Nigeria, he disclosed that at a young age, he had started doing menial jobs to help his family survive.

However, his struggles to earn money weighed heavily on him, Kanayo O. Kanayo stated.

“When I look back, I sold agidi (cornmeal). And my brother’s wife, whom I lived with in those days in Enugu, didn’t want to know your age. She would pack dozens of agidi on my head, and God save me if I returned home with some unsold items, the beating I would receive that day erh.”

The actor noted that during one of his day’s hawking, he had the urge to jump off a bridge to end his suffering.

“One day, I got to Abakpa bridge, and as a small boy, then I looked down into the water of about 30 feet deep, and a voice said to me, ‘why don’t you jump into the water and end the whole thing’? “I was a small boy carrying this heavy thing on my head.”

“But I didn’t listen to that voice, and luckily for me, I finished selling all the agidi. The next day, I was given Akamu to go and sell in the streets,” he revealed.

Kanayo O. Kanayo said that that experience was only a small part of what he had been through as a child.

He stated that growing up in his village, he dug “pit toilets” for a living, adding that that was his only way to make money and support his family whether he wanted to or not.

The veteran actor stated that people see him on TV and reduce his life to the glamorous lifestyle of a celebrity, but that was not his life at all.

“When I remember that I had to dig a pit toilet to contribute to my family’s economy, I say to myself; I have come a long way. I also did other menial jobs to support my parents. We have been through the thick and thin of life. I wasn’t born with a silver spoon in my mouth. But I want to make sure that children don’t go back to where I started.”

Although he strived to make a better life for his kids and his siblings, Kanayo O. Kanayo explained that it was important for his children to know where he came from and how he started life.

“And on that note, I want to advise every father and every mother to avoid giving their children all they asked for. Give them all they need, not all they want. It’s very important because when you hear about most people on the street,  they are more focused on business,” the veteran actor said.

Kanayo O. Kanoyo added that over the years, he has stayed flexible, and marketable and has also aligned himself to new openings to help him remain relevant in the industry.