KATH Eye Centre on hold due to smoke from barracks 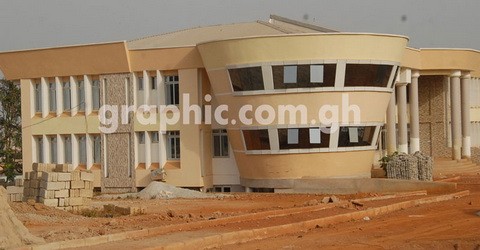 The newly constructed Eye Centre of the Komfo Anokye Teaching Hospital (KATH) has not begun operations because smoke and other materials emanating from 10 adjacent structures occupied by relatives of Fourth Battalion (4BN) soldiers threaten to damage the center’s sensitive equipment.

The centre cannot be used until the structures are demolished. Construction on the new clinic, which the hospital initiated in 2010, was complete by late 2012.

The Chief Executive of KATH, Professor Ohene Adjei, reported that, “until the adjourning structures close to the newly constructed Eye Centre are completely demolished, we cannot start operations.”

The soldiers have relocated from the 4BN, near the KATH, to their new site at Nyankyenerase near Asuoyeboa, but some of their relatives have continued occupying some of the houses near the Eye Centre.

The clinic was constructed at a cost of GH¢1.6 million and is meant to serve as a referral facility for patients from the North of Ghana and other parts of the West African sub-region.

The project was funded through internally generated hospital funds. Additional funding was provided by the United States Agency for International Development (USAID) and the Himalayan Contract Project.

Professor Adjei explained that efforts by the hospital to have the structures demolished had been unsuccessful but reported discussing the matter with the new Minister of Health, who he said had promised to sit down with the Minister of Defence and arrive at an amicable solution.

Vice President Kwesi Bekoe Amissah-Arthur inspected the project in December 2012, during which time hospital authorities briefed him on the challenge.

According to Professor Adjei, the Vice President had assured them that he would collaborate with various sector ministries to see that the structures are demolished.