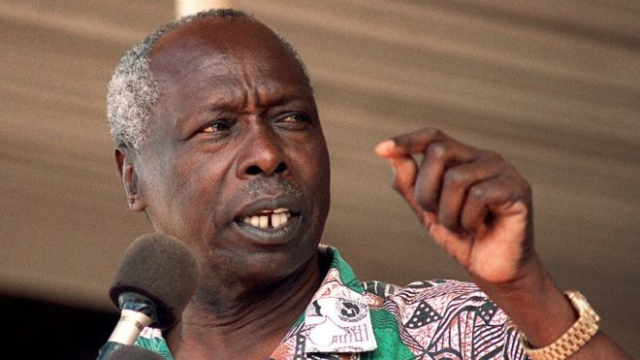 A court in Kenya has ordered former President Daniel arap Moi to pay 1.06bn shillings ($10.5m; £8.2m) in compensation to a widow for illegally seizing her land.

The land was illegally grabbed 36 years ago but only transferred to Mr Moi’s name in 2007.

The former president, who remains Kenya’s longest-serving leader, was accused by Ms Chelugui and her son David Chelugui of transferring their family land into his name two years after Ms Chelugui’s husband passed away.

Mr Moi is then said to have sold the land to Rai Plywood Limited, a timber firm, the BBC’s Mercy Juma reports from Nairobi.

Rai Plywood Limited told the judge that it had bought the land from Moi in 2007 after thorough legal checks.

However, Mr Moi was unable to provide the court any proof of how he came to possess the land, our correspondent says.

Judge Anthony Ombwayo said Mr Moi had behaved in a way that was “unconstitutional, irregular, unprocedural” and “tainted”.

He ruled the country with an iron fist and was accused of human rights abuses.

Under international pressure, he allowed multi-party elections in 1992, which were marred by widespread violence and allegations of rigging.

A test-case for Kenya’s many land grabs?

This ruling is hugely significant for Kenya.

There have been numerous cases of land grabbing by high-ranking government officials and wealthy business people over the years but the victims generally have neither the will nor the money to fight back.

Corruption in the judiciary is another huge problem. When disputes are taken to court, they often drag on for many years.

Many hope that this will come to be seen as a test case and that it will send a message to powerful people that they can no longer simply seize land belonging to the less well-off.