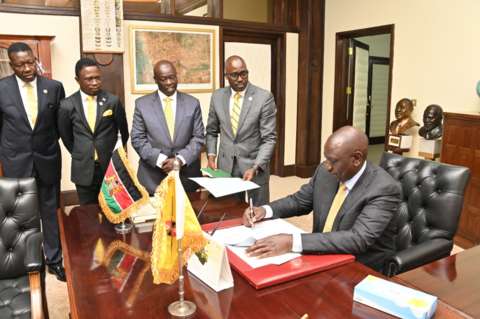 William Ruto was sworn in as Kenya's president on Tuesday

In his first day in office, Kenya’s President William Ruto gave orders to reverse some of the policies of his predecessor, Uhuru Kenyatta.

President Ruto appointed six judges nominated by the Judicial Service Commission three years ago, who Mr Kenyatta had snubbed on claims they were “tainted”.

The six judges will be sworn in on Wednesday.

The new president had indicated in his inauguration speech that he would end fuel and food subsidies.

He said they were costly and ineffective.

Mr Ruto also said all cargo clearance would be reverted to Mombasa port – a roll back to Mr Kenyatta’s order that saw port services transferred to Naivasha to ensure repayment of a Chinese loan taken for the construction of a railway between the port of Mombasa and the capital, Nairobi.

The orders were part of Mr Ruto’s campaign promises.