Kevin Durant requests for trade and Miami Heat should be his next destination - MyJoyOnline.com 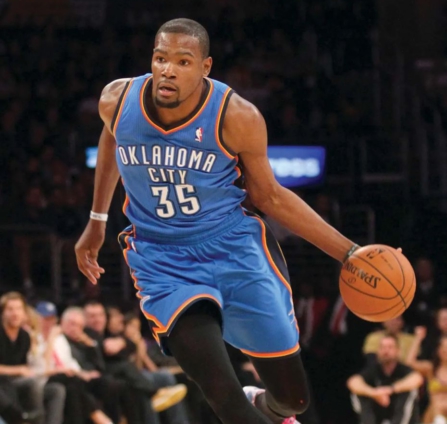 Sorry, Damian Lillard but you won’t get the wish you proudly posted on Instagram because your dream combo with Kevin Durant won’t happen. Portland Trailblazers simply don’t have enough assets to make a trade for the superstar Durant from Brooklyn Nets possible since the Nets won’t have enough equity in return from the trade. The best assets Portland has are Anfernee Simmons, recently drafted Shooting Guard Shaedon Sharpe, Josh Hart and future draft pick and that isn’t enough to appeal to a Brooklyn Nets side that has been wounded badly in recent months.

First Kyrie Irving’s decision to not vaccinate against the Corona Virus placed a dark cloud on the franchise, then James Harden forced his way out of the team then the playoffs sweep at the hands of Boston Celtics topped all that up. Since the season ended, talk is rife the team could end up without its two remaining stars with Durant reportedly angling towards a trade from the team.

Kyrie Irving despite opting into the final year of his deal isn’t having the best relationship with the organization and Head Coach Steve Nash at the moment and could push for trade with Los Angeles Lakers among his preferred destinations. For a team that promised so much in terms of having very realistic chances of winning the NBA title, ending up without all three stars just two seasons after putting them together is such a letdown for the franchise.

Should this scenario play out, Brooklyn is sure to struggle to get the attraction and attention it craves for in a condensed New York City sports market aside watching its title aspirations go up in flames. For such a team, assets of multiple grades higher than Simmons or Josh Hart or any player bar Damian Lillard won’t cut it in terms of a prospective trade deal.

However, Miami Heat doesn’t have this type of problem as the Pat Riley run team has a handful of very interesting assets to pique Brooklyn Nets. In Duncan Robinson, Tyler Herro and Max Strus or a future draft pick, Miami offers pieces that fit alongside what Ben Simmons who is a non shooter. The bastion of hope in this star player exodus from Brooklyn is Simmons who has at least five more years to show off his insane skill as a passer, defender and dynamic scorer in transition.

But that is only possible if Simmons is engaged and not aloof as he has done for the most part in his basketball career dating back to his Louisiana State University days that got scouts to question his desire to play basketball. Herro and Robinson score from all over the floor and give Brooklyn multiple scoring options around Simmons beyond Seth Curry, Joe Harris and maybe Patty Mills who is yet to opt into the final year of his deal.

Trades are done to balance player value equity on the floor or salaries on the books; the best trades meet both requirements. In a Durant trade from Brooklyn to Miami, salaries get balanced as Herro is in line to sign a five-year contract extension with the Heat for $181 million with an average salary of $31.2 million. Add that up to Robinson’s yearly average salary of $18 million and it is just inches ahead of Durant’s average $48 million average salary ensuring parity on the cap sheet.

On the floor, though Brooklyn will miss Durant’s all-time great talent, getting compensated with the shooting and still more room for growth of Herro and Robinson is enough to get Brooklyn to sign off on this deal. Getting Durant is a basketball match made in heaven as the former Oklahoma City Thunder star gets the top defense first unit he has needed since he left Golden State Warriors.

Durant’s presence creates more room inside for Bam Adebayo and Jimmy Butler to do damage inside the paint and from 15-20 Feet range from the basket respectively. Kyle Lowry who should be leaner and healthier than he was last season benefits from Durant’s shot making and shooting abilities by getting open lanes to drive into for layups and assists.

With a starting unit of Durant, Lowry, Butler, Adebayo and either Strus or Victor Oladipo, Miami has the best starting unit on paper in the East and becomes a lockdown favourite to represent the Conference in the NBA Finals. Durant would lean into such a move considering his recent uptick in injuries, advancing age and playing in Miami gives him a big chance to win a title outside Golden State and put to bed all doubt about his greatness.

Heat President Pat Riley is famous for his canny ability to piece stars together in spite of a salary cap to make title runs and after piecing together Dwyane Wade-Shaquille O’Neal-Gary Payton and LeBron James-Chris Bosh-Wade on title winning teams, this is a project he’d be very interested in.