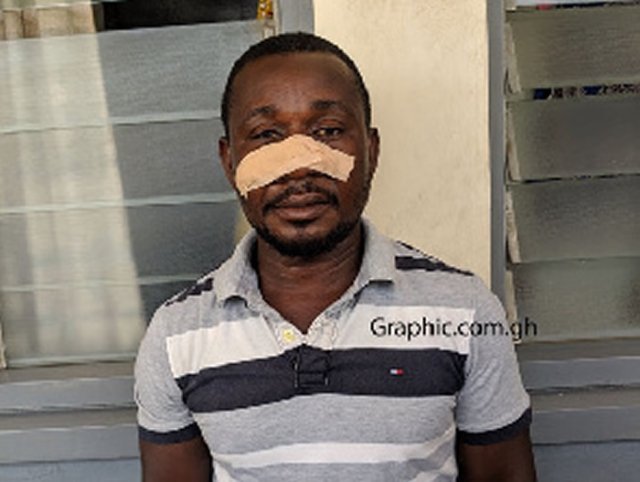 Residents of Kokrobite, in the Ga South Municipal area, have vehemently condemned an attack on Gershon Asiedu, a staff of Power Distribution Services (PDS).

Mr Asiedu was assaulted when he and a team of field officers of the company were on duty in the community last week ago.

A statement jointly issued on Wednesday by traditional authorities, residents and the Assemblyman of Kokrobite and presented to the Management of PDS described the incident as “dastardly and criminal” and pledged to assist the local Police to smoke out the culprit.

On Saturday, March 16, one Alfred Amedeka alias ‘Pablo’ a resident of Kokrobite now on the run, attacked a team of PDS field workers who were pruning tree branches off an overhead electric cable with a cutlass, inflicting serious facial and body wounds on Mr Asiedu.

Amedeka fled the town before he could be apprehended by authorities and has since remained at large, although the Police and residents are confident that he will be brought to book sooner than later.

“We hasten to render our unreserved apology for the dastardly act and hereby convey our deepest sympathies to the victim, his family, his colleagues and indeed to the entire Management body of Power Distribution Services (PDS),” the statement said.

The statement further said residents of Kokrobite are mindful of the status of their town as a popular tourist destination and a recreational enclave for many Ghanaians and foreigners.

Photo: The Kokrobite beach is a popular tourist destination

Residents say they see the assault as "scandalous and an objectionable blot" on the image of their community.

“Ultimately, we do understand that the only way to redeem our image and restore confidence among service providers in the safety of our community, is to assist in ensuring that this heinous crime does not go unpunished,” it said.

The statement was issued after a special delegation of opinion leaders, led by the President of the Kokrobite Residents Association, Mr Simon Ampadu and the local Assemblyman, Mr Rockson Saka Allotey, met with the Management of PDS on Monday.

The statement disclosed that, since the incident occurred, the community, led by the Assemblyman, the President of our Residents’ Association, the Chiefs and some opinion leaders, has worked closely with the Kokrobite District Police in efforts to locate and apprehend Mr Amedeka.

‘We have gathered and passed on to our local Police, useful information which led to the interrogation of suspected accomplices of the culprit and are still working with the Police to identify and engage close relations who may possibly know the hideout or movements of the culprit. We are confident that with this level of community collaboration with the Police, it will not be long before the fugitive is cornered and brought to book,’ the statement said.

The statement further assured the Management and staff of PDS that with the combined effort and vigilance of the residents, the traditional authorities and the Kokrobite District Police Command, substantial public education has already begun in a bid to ensure and guarantee the personal safety and well-being of every PDS field officer assigned to work within our community.

Originally a small fishing town, Kokrobite, now with a population of about 7,000, has grown into a busy residential community whose shoreline is ranked among the most fancied and patronized beaches in the country.