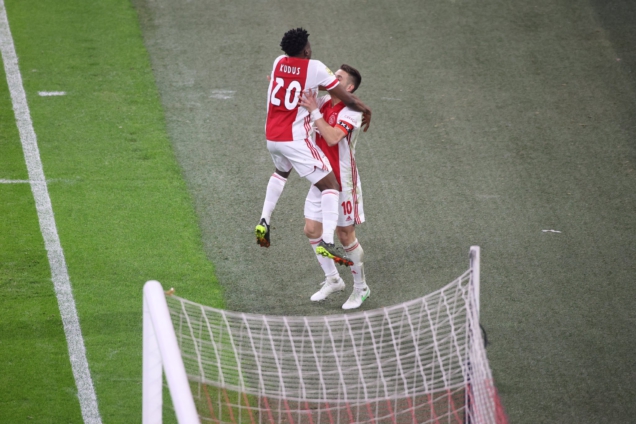 Ghana’s Mohammed Kudus returned to the Ajax starting line-up with a goal as they handed Sparta Rotterdam a 4-2 defeat in the Dutch Eredivisie on Sunday.

Cote d’Ivoire striker Sebastien Haller was twice on the score sheet for the Lancers in the matchday 23 fixture at Johan Cruijff Arena.

The win consolidates Ajax’s position at the top of the league table.

Kudus made a comeback to the line-up for the first time since going off injured in the sixth minute of a Champions League clash with Liverpool in October last year.

Expected to be out of action for “many months” according to the club, the midfielder made a return to training in December, completing his comeback as a second-half substitute in a league clash with PSV a month later.

An injury relapse on his return sent him back to the treatment room until earlier this month when he made a comeback against PSV – again – but this time in the Dutch Cup.

Most recently, he was a late substitute in Ajax’s 2-0 league win over Heracles but was left on the bench against Lille in the Europa League on Thursday.

Sunday’s outing was his sixth league outing for Ajax, the goal his second following a strike against Heerenveen in October.

Haller, meanwhile, continues his fine form for new club Ajax with his two goals against Sparta.

The France-born, who joined Ajax from English side West Ham United in January, has now registered five league strikes and five assists in eight matches for the Lancers.

In all competitions, he has made 10 outings, scoring seven times and assisting five goals.

Morocco duo Oussama Idrissi and Zakaria Labyad were substitutes for Ajax in the 59th and 75th minutes, respectively, in Sunday’s game but compatriot Noussair Mazraoui was not in the matchday squad.

Dutch youth striker of Ghanaian descent Brian Brobbey also joined the action in the 75th minute. Burkina Faso forward Lassina Traore, on the other hand, warmed the bench for the Lancers.

Ajax host Lille in the Europa League on Thursday before taking on PSV in their next league game.