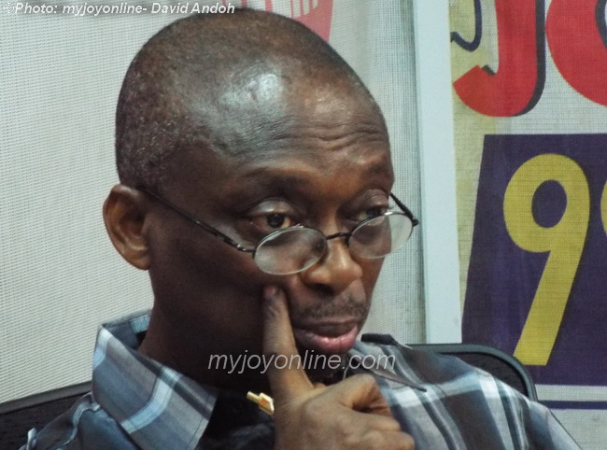 Well, Kweku, not in a proper democracy, like the one we've got right now.

But, Kweku, I know that when you live in a country in which journalists have, in the past, been sent to jail under totalitarian laws such as  the statute on  “criminal libel”, you become a little wary when publishing the truth.

Nevertheless, I would like to remind you that truth is not libel because I am uneasy about some of the things you have been saying on TV in the past few days. In a discussion on the brutal murder of the late Major Maxwell Mahama, for instance, you said that you had seen “documents” that put the murder in a different light. These, you said, included “a petition” which revealed some of the background facts relating to illegal mining in the area where the murder occurred.

You said you were ready to be a “witness” if the Government would but create a platform where you could relate what you knew.

Now, that's all well and good, Kweku, but the function of good journalism is not to give “hints” about public issues. If a journalist knows the truth about an issue that is exercising the minds of members of the public, and he has the facts to “stand up” or prove that truth, then it is his patriotic patriotic duty to disclose those facts for the public good.

Barely a week after you'd made your statement on the background to Major Mahama's death, you were back in the studio to say that a “high-up” in the Forestry Department had been selling patches of land in the forest reserves to galamsey operators – including Chinese nationals.

This is a report of what you said:

QUOTE: “The latest revelation by the Editor-in-Chief of the New Crusading Guide, Abdul-Malik Kweku Baako, is that an official of Ghana’s Forestry Commission is selling forest concessions and reserves to Chinese miners for his personal gain. He made the revelation [on]… Multi TV's Newsfile on Saturday 10 June 27 in a discussion on illegal mining in the country.

“The Forestry Commission of Ghana is responsible for the regulation of utilization of forest and wildlife resources, the conservation and management of those resources and the coordination of policies related to them. Mr. Baako however did not state when the tape will be released”. UNQUOTE

Earlier still, on 16 March 2017, the following report was attributed to you, Kweku:

“The Editor-in-Chief of the New Crusading Guide, Kweku Baako Jnr, has hinted that [the] renowned undercover Journalist, Anas Aremeyaw Anas, will soon expose influential persons, including chiefs, politicians and officials] in the security services, who are neck deep in galamsey … in the country.

“According to [Baako] the sort of extensive investigative work done by his protege (Anas) is so ‘explosive’ [it] will blow the minds of Ghanaians, [when they see] the extent to which big men in the country have been unfair to Ghana by supervising the destruction of the environment for their selfish interests.

“He said the magnitude of the exposé on the Judges bribery scandal, comes nowhere near what has been unearthed in the galamsey investigations.”

(The issue of galamsey has been an age-old problem with successive governments finding it very difficult to fight. … Galamsey has destroyed the country’s water bodies, resulting in the drying up of these water bodies. This has resulted in the pollution of the water the Ghana Water Company Limited treats and supplies to the populace.)

But Kwaku Baako Jnr, believes the naming, shaming and possible prosecution of these big men who are behind the practice of galamsey will go a long way in fighting the illegal activity. “Members of the NDC and NPP are neck deep in this mess. They manipulate the system and have their way in the galamsey business, but pretend they are fighting the menace. I’ve stopped short of mentioning names because the time we’ll name and shame people is almost up and it will be very explosive. I don’t think we care who will be mentioned or fingered, because really their bad actions are too much…what sort of money at all are they looking for? I mean people in top positions and those at the bottom are all part [of it]; they are destroying the environment and they don’t care. If you arrest them (especially the Chinese) today, tomorrow they are released because of their political connections.

“[Baako]added: “What is annoying is that right after they are released they go back to the galamsey site to continue with the illegal deeds. There is a certain Chinese woman based in Kumasi who is all over the place showing impunity, she goes about snapping pictures of some big men in Ghana and circulating them on social media to show how politically connected she is. She’s very insolent because some party gurus in the NDC were dealing with her while in power and now some NPP party gurus are also dealing with her, so for her, heads or tails, she’s a winner. I just don’t understand how come she’s so powerful. But sooner than later all of this will stop. We should stop all these things…That’s all I’ll say. Very soon Ghanaians will realize that even Anas’ exposé on the Judges is chicken feed.” UNQUOTE

Now Kweku, this is stirring stuff and I congratulate you on it. But I know you have read widely, and so I shall remind you of the warning issued by Frantz Fanon against what he called the 'mystification' of post-colonial society by some of their new rulers.

I think that you guys are probably sailing a bit too close to the wind of mystification than you realise.

You see, it is bad journalism – unless it is journalism that is entirely carried out for commercial profit – to titillate the public with half-revealed truths, in the hope that the public would flock to purchase whatever newspaper eventually publishes it, when the full truth is finally published. It is also dangerous (as far as curbing serious crime is concerned) because the security agencies, when they do decide to act, act best when they do so in what is called a “swoop”. When they “swoop”, the alleged culprits are taken by surprise and are unable to cover their backs.

Giving “hints” and “winks and nods” prepares the criminals to take precautions. Some may even run away and escape justice. In certain cases, they may prepare to use violence to defend themselves.

Hiding information from the general public can also produce unexpected consequences. Who knows but that if the alleged secret information relating to the Denkyira Oboase situation had been put in the public domain, events there might have taken a less tragic turn than they did?

Factual revelations about sensitive situations, like the galamsey one, can deter crime. Public servants involved in covering up the crime would be made to realise that the game is up and end their nefarious activities. Other public servants might also get a prick of conscience and leak information they might hitherto have been hiding.

With regard to galamsey in particular, so much harm has already occurred that time for salvaging operations is very short. Everything that can be done to prevent further damage should be done. Very very quickly. Otherwise there will be no rivers and farms left to save.

And – by the way – in law, TRUTH, or JUSTIFICATION – is a complete defence in any  libel action! For one of the cardinal principles behind the law of defamation/libel is that “A man cannot claim a reputation to which he is NOT entitled.”

That means that if you can prove that a man is a criminal, then he can't sue you for defaming him by saying he's a criminal. For you have done nothing more than portray his true character as it is, using freedom of expression.