Lady Gaga had a 'psychotic break' after sexual assault left her pregnant - MyJoyOnline.com 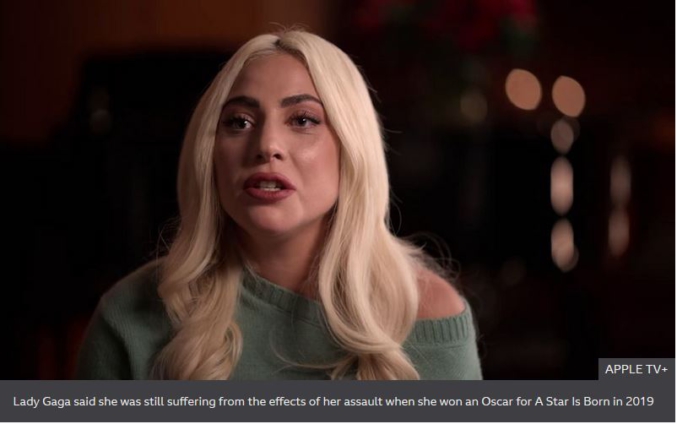 Lady Gaga has revealed she suffered a breakdown as a result of sexual assault that led to pregnancy.

The star was 19 when she was raped by a male music producer, who had threatened to burn her music if she did not take her clothes off.

She says her alleged rapist then “dropped me off pregnant on a corner… because I was vomiting and sick”.

Years later, she had “a total psychotic break” and was in an “ultra state of paranoia” as a result of the trauma.

Gaga, whose real name is Stefani Germanotta, was speaking on the first episode of Oprah Winfrey and Prince Harry’s new Apple TV+ series, The Me You Can’t See, which tackles the stigma around mental health.

She broke down in tears as she described her assault, which took place in her early days in the music industry.

“I was 19 years old, and I was working in the business, and a producer said to me, ‘Take your clothes off,'” she recalled. “I said no and I left, and they told me they were going to burn all of my music. And they didn’t stop.

“They didn’t stop asking me, and I just froze and I… I don’t even remember.”

Now 35, the singer said she would never name her attacker.

“I understand this #MeToo movement, I understand that some people feel really comfortable with this, and I do not,” she continued. “I do not ever want to face that person again.”

Gaga first discussed her rape in 2014, and addressed it in songs such as Swine and ‘Til It Happens To You – which soundtracked The Hunting Ground, a documentary about sexual assault on US college campuses; and was nominated for an Oscar in 2016.

She said her breakdown came years later – and was still going on when she accepted her Oscar for A Star Is Born in 2019.

It began when she was admitted to hospital for acute pain and numbness, and was surprised to be sent to see a psychiatrist.

“I [couldn’t] feel my own body,” she recalled. “First I felt full-on pain, then I felt numb, and then I was sick for weeks after.

“I realised that it was the same pain that I felt when the person who raped me dropped me off pregnant on a corner, at my parent’s house, because I was vomiting and sick. Because I had been being abused, and I was locked away in a studio for months.”

The star added that trauma had changed her as a person, and would never leave her.

“I had a total psychotic break and, for a couple years, I was not the same girl. The way that I feel when I feel pain was how I felt after I was raped.

“I’ve had so many MRIs and scans where they don’t find nothing. But your body remembers.”

It took her two and a half years to recover, she said, but “getting triggered once” is enough for her slip back into feelings of physical and emotional pain.

However, she ended on a hopeful note, saying that, after years of effort, she had “learned all the ways to pull myself out of it. It all started to slowly change.”

Gaga is one of a number of well-known faces to take part in The Me You Can’t See, including Glenn Close, Olympic boxer Virginia Fuchs and celebrity chef Rashad Armstead, as well Winfrey and the Duke of Sussex.