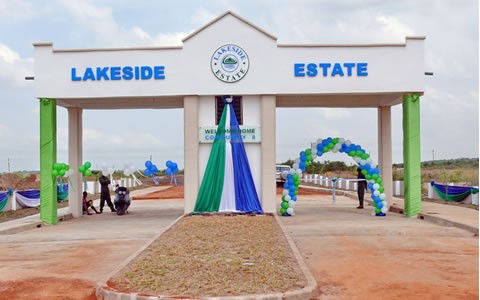 An Accra High Court has declared that a parcel of land measuring 2,911.53 acres delineated in the Land Title Certificate No. TD 0513, Volume 019 Folio 241 legally belongs to Agri-Cattle Lakeside Estate Ltd.

The land, situated at Katamanso in the Greater Region, forms part of the Nungua Stool lands.

The Plaintiff – by name John Offei Armah sued as an Executor of the will of one Dr. Emmanuel Maama Boye who died on 24 September 2002, claiming that, the Defendant (Agri-Cattle Lakeside Estate Ltd.) had trespassed onto his land.

He further stated that these acts of trespass by the Defendants were brought to his attention in 1998.

The Head of Ashalley-Botwe Family who was the 2nd Plaintiff in his Statement of Claim also averred that his Family was the ultimate owner of the land described in the Schedule and Site Plan attached to the Writ of Summons. This Family Land is contained in a statutory Declaration No. 4345 and registered as 761/1977.

The Ashalley-Botwe family went on to aver that the Family has defended its title to the disputed land as being part of a large tract of land belonging to the Family in suit No. L2970/93 which travelled up to the Supreme Court culminating in a Judgment dated 5th May 2004 in suit No. 24/2004.

According to the 2nd Plaintiff, his Family, as owners of the disputed land and other adjourning lands, leased the portion in the schedule to Dr. Emmanuel Maama Boye (deceased) around 1970 per a Lease Agreement Registered as No. 609/1970 for Agricultural purposes.

However the Supreme Court has ruled in the Ashalley-Botwe land in a case entitled; Adjeitey Agbosu & others vrs. Kote & others (2003 – 2004) SCGLR 420 that Statutory Declarations are Self-Serving documents without any probate value, yet the Ashalley-Botwe family continues to rely on same to deceive the Courts.

In that Supreme Court ruling, the Lands Commission was ordered by the Supreme Court at page 469 to expunge and cancel the Statutory Declaration with Registration No. 761/1977 AC 4345/76.

His Lordship Justice G. S. Suurbaareh also described the Statutory Declaration No. 761/1977 AC 4345/76 as a mere decoration on the records of the Lands Commission.

The case of Agri-Cattle Lakeside Estate)was presented by its Managing Director, Noble Prince-Joseph Ayiku who said his grantor is the Nungua Stool. He said the disputed land was granted by the Nungua Stool in 1970 to Black Watch Cattle Breeding from which the company also assigned its interest to the Agri-Cattle Ltd in 1974.

He added that the land which comprised 4,244.25 Acres has been registered as No. 390/974. Agri-Cattle Ltd built a bungalow and quarters and constructed dam for its cattle in 1974, an initiative commended by Col. I.K. . Acheampong’s Government.

The Managing Director of Agri-Cattle Lakeside Estate further stated that in 1992, the Government of Ghana acquired portion of its land per the Executive Instrument (E. I. 15) for State Housing Corporation changing the land use of the area from farming to Real Estate Development.

As a result, in 1995, his Company entered into an Agreement with its grantor Nungua Stool, to go into Real Estate Development. He then went on to narrate how in 1996 he applied for a Land Title Certificate to cover the remaining 2,911.53 acres. He tendered series of Search Results from the Lands Commission and Judgments given in favour of his company, Agri-Cattle Lakeside Estate Ltd.

Then the Lessee later assigned its interest to the Agri-Cattle in 1974. The Nungua Stool gave its consent to Agri-Cattle to use the land for Real Estate Development.

He further stated that the disputed land belongs to the Nungua Stool situated at Katamanso.

According to Dr. Nii Kpakpo Sraha III, the land which was demarcated in 1904 by Francis Gabriel Crowther had been declared in 1892 as part of Nungua Stool land by Justice Hutchinson of the Supreme Court of the Gold Coast.

He also gave an account of other grants made by the Nungua Stool to individuals, companies and Government in and around the disputed land area. The High Court therefore dismissed the claims of the Plaintiffs: John Offei Armah and the Ashalley-Botwe Family and awarded a cost of Eight Thousand Cedis (GHC8,000) against all the Plaintiffs. The Court entered Judgment in favour of Agri-Cattle Lakeside Estate Ltd.and