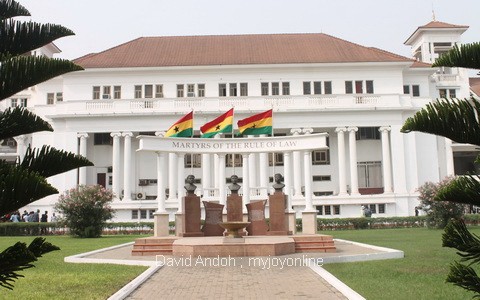 A Professor of Law and Dean of Research and Graduate studies at the Mountcrest University College has stated that the Supreme Court, in their judgement handed down in the Presidential Election Petition, disappointed Ghanaians and failed to uphold the 1992 constitution of the Republic of Ghana.

Professor Kwame Frimpong, at a symposium organised by the Danquah Institute to critique the judgement of the 9 judges, stated that the judges failed woefully to discharge their constitutionally mandated duty.

He explained that the petition filed by the petitioners was a perfect opportunity for Supreme Court to “take a firm position against impunity that has been ravaging this nation” but rather chose to endorse an illegality.

According to the law professor, the judgement handed down by the Atuguba Court has “sent us back to the stone age”, asking rhetorically “When will the Supreme Court wake up?”

The Supreme Court judges, according to the law Professor, had a golden opportunity to remedy this ill, but rather chose to endorse illegality.

Delving into the judgements of Justices Atuguba and Adinyirah, Prof. Kwame Frimpong stated that he was intrigued to see them shifting the burden of responsibility onto the polling agents and rather discharging the presiding officers of any wrongdoing.

Prof Frimpong was of the view that Justice William Atuguba’s judgement was incoherent and did not advance constitutionalism, as he rather decided to rely on “criminal and company law” in his judgement, which to him has no relevance and is not ideal for constitutional issues.

Justice Adinyirah, according to the law Professor, devoted about half of her judgement on the role of the polling agent even though the mandatory constitutional requirement of signing the declaration forms was on the presiding officers instead.

“When you cancel results of an election, it doesn’t amount to disenfranchisement. You are only declaring that the appropriate legal procedures have not been kept,” he said.

He continued, “The judges by their judgement are saying that when the presiding officer does not sign, it doesn’t matter. However, once a presiding officer is mandated to sign, it establishes that credible voting took place. Once there is no signature, then it means no election took place and as such any result presented must be cancelled.”

Professor Frimpong advocated for the setting up of a constitutional court, akin to the one in South Africa, to adjudicate on election petitions and constitutional matters instead of placing such cases before Supreme Court judges, many of whom he said, do not have much constitutional knowledge.