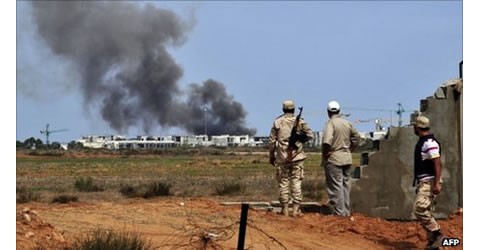 Libya’s ousted leader Col Muammar Gaddafi has called on Libyans to come on to the streets “in their millions” to resist the nation’s interim leaders.

In an audio message broadcast on Syrian-based Arrai television, he says conditions in Libya have become “unbearable”.

The message comes as heavy fighting continues between anti-Gaddafi forces and loyalists for the city of Sirte.

Col Gaddafi and his spokesman have regularly used Arrai as a means of getting his message across since he was forced from the capital, Tripoli, by forces of the National Transitional Council (NTC) on 23 August.

Col Gaddafi’s last speech on Arrai was on 20 September.

It was unclear when Thursday’s poor quality broadcast was recorded, but in it he says: “I call on the Libyan people, men and women, to go out into the squares and the streets in all the cities in their millions.

“Go peacefully… be courageous, rise up, go to the streets, raise our green flags to the skies.

He added: “To those who recognise this council, be ready for the creation of transitional councils imposed by the power of fleets [Western powers] to replace you one by one from now on.”

Col Gaddafi has eluded capture since the fall of the capital and despite speculation of his presence in Bani Walid, Sirte, Sabha and other areas further south, there has been no confirmation of his whereabouts.

Intense fighting is meanwhile continuing for Sirte, 360km (225 miles) east of Tripoli and one of the last loyalist bastions.

One NTC commander, Nasser el-Mgasibi, told AFP news agency: “Today we carried out a pincer movement to try to cut off the Mauritanian Quarter, where there are a number of [loyalist] fighters, and to cut off their rear.”

Gun battles took place along a section of the seafront, with another NTC commander saying that loyalist snipers were constantly changing positions to try to pretend the Gaddafi troops were making advances.

Thousands of civilians have fled Sirte but the NTC believes hundreds are still there.

Some of those who have escaped have complained of indiscriminate Nato and NTC bomb and artillery fire.

Nato insists it has not struck Sirte since the weekend and “is siding with none of the forces on the ground”, AFP reports.

There are also reports that a 1,000-strong NTC brigade is being sent to the other major loyalist bastion, Bani Walid, to try to break an impasse there.

Meanwhile, Nato defence ministers are meeting in Naples to discuss the Libya campaign.

US Defence Secretary Leon Panetta, who is meeting military commanders of the campaign, said it had been a “remarkable achievement”.

Nato Secretary General Anders Fogh Rasmussen said: “We are determined to pursue our operation as long as threats persist, but to end it as soon as conditions permit.”