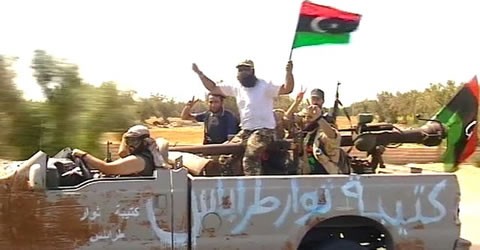 A convoy of Libyan rebels has rolled into Tripoli past celebrating crowds after a day of heavy fighting in and around the capital.

They appeared to meet little resistance and civilians emerged to cheer them, waving flags and firing salutes as they passed in their pick-ups.

It was unclear how far they had advanced and how much of the city was still under government control.

He is believed to still have thousands of armed followers in the capital.

Gun battles have been raging near a hotel used by foreign journalists.

Rebel forces have advanced from the east and west in recent days, backed by Nato aircraft enforcing a UN resolution to protect civilians.

Critics accuse the alliance of overstepping its mandate by helping the rebels – an allegation it denies.

As one force of rebels arrived from the west, another was setting up checkpoints in suburbs on the eastern outskirts.

It is clear there have been bloody battles in parts of Tripoli, the BBC’s Matthew Price reports from the city.

In areas where the fighting has not been taking place, people are said to be staying indoors, our correspondent adds.

Gunfire could be heard to the east, west and south of the city centre. Four loud explosions were also heard.

Government sources said at least 376 people had been killed and more than 1,000 wounded since Saturday evening. The figures could not be verified independently.

Unconfirmed rebel reports say a group of fighters slipped into Tripoli by sea from Misrata and engaged pro-Gaddafi forces in the city’s eastern Tajoura district, where clashes between opponents and supporters of Col Gaddafi have been reported since Saturday.

Unrest was also reported in the eastern districts of Soug Jomaa and Arada.

Rebels have taken the base of the Khamis Brigade, one of the best-trained and equipped units in the Libyan military, commanded by a son of Col Gaddafi.

It is unclear if the base, previously bombed by Nato, was in use when the rebels arrived.

Earlier on Sunday, rebels advancing from the west captured the town of Jaddayim but after pushing on to Maya, 35km west of Tripoli, they were forced back by pro-Gaddafi forces with heavy artillery.

They were met with very heavy incoming fire and ran back along the road, setting up a new front line a few kilometres out of the town, the BBC’s Rupert Wingfield-Hayes reports.

A government source told our correspondent in Tripoli that 65,000 “professional soldiers” loyal to Col Gaddafi were ready to defend the city.

Libyan Information Minister Moussa Ibrahim accused rebel forces of massacring people in towns and villages seized in recent days, and warned of “many” deaths and “terrible crimes… inside Libyan cities”.

At the same time, he urged the rebels to open talks. “If you want peace, we are ready,” he said.

Mr Ibrahim also accused Nato of “opening the roads ahead of the rebels who are too weak to do anything themselves”.

“Our mandate is to protect the population of Libya against attacks or threats of attacks and this is what we have done since the beginning,” he said.

There have been renewed international calls for Col Gaddafi to stand down immediately. A Nato spokeswoman said his government was crumbling while the White House said it believed his days were numbered.

German Chancellor Angela Merkel said it would be good if Col Gaddafi gave up power as quickly as possible, to avoid further bloodshed, and French President Nicolas Sarkozy said Libya had reached a decisive moment.

Libya’s conflict broke out in February, inspired by uprisings in Tunisia and Egypt which toppled the presidents of those countries.

Rebels in the east rapidly consolidated their gains, but a stalemate developed in the west as rebels there faced overwhelming military force.