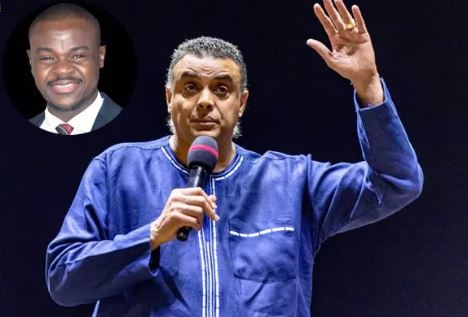 At the Ivato International Airport in Madagascar, the missionary-in-charge of Lighthouse Chapel International’s branch in that country, Bishop Larry Odonkor, faced his assistant pastor, Rev. Edmund Amartey, and hugged him.

It was his final goodbye to Madagascar, to his mission, and to the man who had helped him grow the church there.

Behind the two men, an inanimate helper, a 2003 Toyota Land Cruiser was parked.  It was Bishop Larry Odonkor’s official vehicle, a loyal servant that had steered him through the towns of the island country, crashing through potholes, to carry the message of the gospel.

Now, the church’s official car was carrying him for the last time. Unlike his assistant pastor, cars cannot be hugged and so Larry gave it a short, hard look, handed over the keys to Rev. Amartey and disappeared into the airport, raptured off by Ethiopian Airline flight.

Nearly two years later, on December 20,2021, Larry Odonkor received a document via DHL. It was from Madagascar.

The document was court summons. Lighthouse Chapel International in Madagascar had sued Larry Odonkor, accusing him of selling the church’s Toyota Land Cruiser and pocketing the money.

Lighthouse was asking the court to order Larry to cough up 80million Ariary (GH¢157,200) in damages. The court in Madagascar gave Larry 40 days to find a lawyer and file an appearance in court when the case was to be called on January 19, 2022.

“Shocking!” Larry described the suit. “Is this where this has gotten to?” he said. He had not anticipated something like this.

It all began four months after Larry Odonkor arrived in Ghana from Madagascar in January 2020 and he tendered in his resignation in April.

“I think the church is too controlling. Then also it is not about the welfare of the people but numbers. I don’t feel the freedom to follow God. Bishop Dag wants to be God in my life and I can’t allow it,” Larry Odonkor told a friend who wanted to know why he resigned.

Along with five other former bishops and pastors, Larry Odonkor went ahead to sue Lighthouse Chapel International for economic exploitation, psychological trauma and emotional abuse.

The church has struck back, filing criminal complaints against Larry Odonkor in Ghana and then later in Madagascar.

In the writ of summons, the church said it bought the Toyota vehicle for Ariary 70million ($21,000).

But “once purchased, the said vehicle was sold by the defendant (Larry Odonkor) and the proceeds of the sale was not paid into the plaintiff’s (church) account.”

“…as a result, Mr. Larry Odonkor “illicitly enriched himself at the expense of [Lighthouse] contrary to the provisions of Article 255 and the law on the Theories of Obligations.”

In the writ, Lighthouse requested the court to “condemn [him] to pay the sum of Ariary 80million as damages for all injuries.”  The church also wanted Larry to pay 70million Ariary (about GH¢137,600), being the total value of the recovery for stealing at 150million Ariary (GH¢294,800).

Larry Odonkor did not appear in court in person when the case was called on January 19, 2022, at the Lower Court of Antananarivo. After searching desperately for a lawyer in Madagascar, Larry said he got one, Johary Stephen Rasendrarivo, and told him his side of the story.

The former Lighthouse bishop told his lawyer that he could not have been the one who sold the car because on the date stated for the sale, he was not even in Madagascar.

He was in Ghana. It was his assistant pastor, Rev. Edmund Amartey, the man he gave the final hug at the airport, who sold off the car.

In a WhatsApp conversation, a concerned church leader in Madagascar confirmed to Larry that on that day, she accompanied Rev. Amartey to sell off the car and also accompanied him to deposit the money in the church’s account.

Larry Odonkor said he had opened that account through his own initiative and he had raised $10,000 to print and import Bishop Dag Heward-Mills’ books to sell in Madagascar.

Proceeds from the sale of the book were his and not for the church. But he said he did not mind depositing it into the church’s account.

“As soon as I finished, they transferred me from Antananrivo,” he said. The transfer was by a text message. Larry said his headache was how to come to Ghana because the church in Accra, he said, had made no provision for his return.

“I had to buy six tickets for me, my wife, my sons, Gladys and Adele. Is there money in the church account for this? No!”

“So, I took money from the books account which is mine, but to allow transparency I allowed the same signatories to sign on the account,” he explained.

Before coming to Accra, he handed over the account to the church and was no longer a signatory. It was his assistant pastor, Edmund Amartey, who sold the car after April 2020. It is not clear where he deposited the money.

These facts were brought to the attention of the Antananarivo court and on February 23, 2022.

The court published its judgment in French, copies of which have been obtained by The Fourth Estate and translated into English.

It said the court “hereby rules in favour of Larry Odonkor; declares all claims by Lighthouse Chapel International to be ill-founded and dismisses them all without prejudice…”

The court also ordered LCI to “pay all cost and expenses” incurred by Larry Odonkor in conducting his case.

“The judgment was not surprising. It was the suit that was shocking,” Larry Odonkor said.