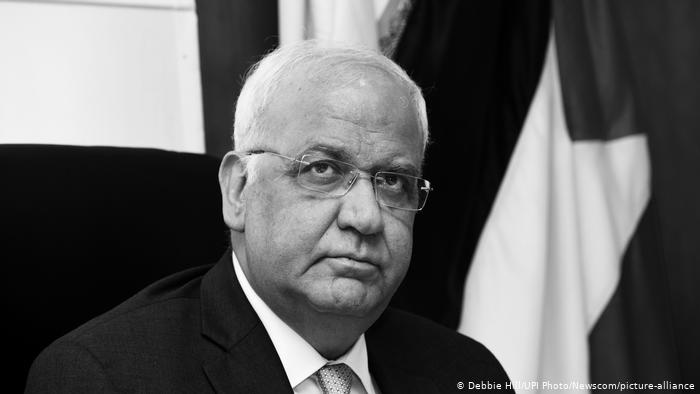 A prominent Palestinian leader, Saeb Erekat, has died from complications related to the coronavirus. He was 65. For decades, he had been a Palestinian chief negotiator in a peace process that has since stalled.

Saeb Erekat, a prominent Palestinian politician and long-time peace negotiator, died Tuesday at the age of 65 after being infected by COVID-19.

Three weeks earlier, Erekat was transferred from his home in Jericho in the occupied West Bank to the Israeli hospital after his condition worsened. Erekat had contracted the coronavirus in the beginning of October and initially suffered only mild symptoms.

The diplomat was at higher risk, as he suffered from chronic pulmonary disease and underwent a lung transplant in 2017 in the US.

Erekat was one of the most outspoken and visible Palestinian politicians on the world stage and often seen in debates in TV studios of international broadcasters.

He was a leading voice against Israel’s occupation of the territory it captured in 1967.

Since 2015, he also served as the secretary-general of the Palestinian Liberation Organization (PLO) and is considered to be a leader in the Fatah movement in the occupied West Bank.

But, to many, what he is most remembered for as a long-time chief negotiator is his firm commitment to peace that culminates in a two-state solution — a goal he never managed to see in his lifetime.

Saeb Erekat was born in 1955 in Abu Dis, a suburb outside Jerusalem. But his home was in the West Bank town of Jericho in the Jordan Valley, where diplomats and journalists would line up for meetings and interviews.

In the 1970s, he went to college in the US and studied international relations and political science at San Francisco State University. Afterward, he earned a Ph.D. in peace and conflict studies in the UK.

As a politician and a senior member in the Fatah movement, he became a close aide to the late Palestinian leader and president, Yasser Arafat, and later served in a similar capacity with the current President Mahmoud Abbas.

Most prominent role as chief negotiator

In 1991 he was part of the Palestinian delegation to the Madrid Peace Conference. But the breakthrough came with the Oslo Peace Accords in the mid-’90s. Erekat became the PLO’s chief negotiator, a role he stayed on even when the peace process gradually began to fail.

Subsequently, he was always there: During negotiations with Israel at Camp David, in the US, in 2000; in Taba, Egypt, in 2001; and in the many other attempts to restart the peace process. Most likely, he is one of the few Palestinian leaders who has spent the most time at the table with his Israeli counterparts.

In a recent interview with DW about Israel’s controversial annexation plans of parts of the occupied West Bank, Erekat reflected on his role as negotiator. “I come from the Jordan Valley. I told Palestinians, once you recognize Israel, once you renounce violence, once you sit and negotiate, you will have an independent state. And now Netanyahu is coming up with a map to annex 94% of my constituency,” said Erekat, referring to the Jordan Valley, Jericho.

“Do you think I can leave the house to face my people, my constituents, who believed in me?” he said, adding, “I am going to be quarantined politically for the rest of my life. I’ll be used as an example in books, lectures and in children’s books. So, do you think there will be a Palestinian in the next hundred years who will sit with the Israelis and repeat what I did?”

His passing comes at a time when Palestinians are left without a foreseeable prospect of any solution — especially in light of the difficult relationship they have with the current US administration.

They have practically cut diplomatic relations with Washington after President Donald Trump recognized Jerusalem as Israel’s capital by the end of 2017. At the beginning of 2020, a new US peace plan dubbed “vision for peace” and also known as “deal of the century,” further strained relations with Palestinians for being seen as favoring Israel.

“It’s a game-changer: They want to cancel all agreements signed, they want to cancel the terms of reference, international law, resolutions of the UN Security Council and General assembly and dictate a solution,” Erekat said in a DW interview.

Illustrating disappointment, he said, “I have done my best to achieve peace with Israel, but there came a prime minister in Israel and a president of the United States who torpedoed every effort to achieve peace between Israelis and Palestinians,” referring to what he hoped would be more equitable than what the US plan proposed.

Erekat was no stranger to controversy. In 2011, the release of the “Palestine Papers” by the Qatar-based broadcaster Al Jazeera exposed details of negotiations with his Israeli counterparts.

In light of a harsh backlash among the Palestinian public, he resigned from his post as a chief negotiator — albeit only for a short time — as it is believed he was requested to return by the Palestinian leadership.

And, like other Palestinian politicians of his generation, he came under increasing criticism by the general public for having been unable to find a solution to the conflict. In the 1990s, many Palestinians considered the Oslo-Accords and subsequent peace arrangements to be an achievement.

Today, these agreements mostly stand for the Palestinian leadership’s failure to establish a sovereign Palestinian state, end Israeli occupation, and the perceived worsening of the overall situation.

Saeb Erekat, who has been described by those who met and worked with him as cordial and engaging, had been hampered by serious health issues in recent years. Nevertheless, he continued to appear in public and remained determined that only a fair and a just two-state solution would bring about peace between Israelis and Palestinians.