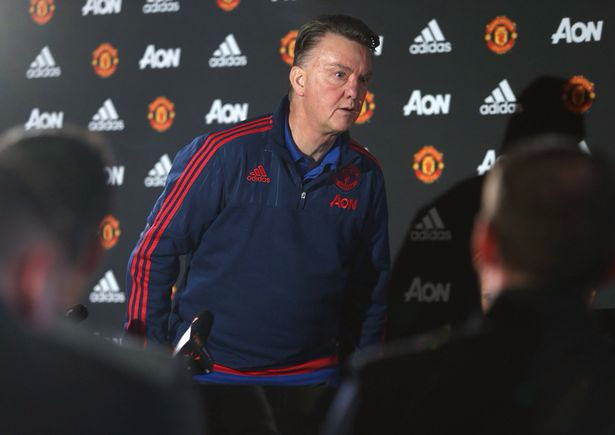 The Dutchman has been under pressure after the worst run of the results in 17 years.

And in an astonishing monologue to the English media, Van Gaal went on the attack. Read it about it here.

“Has anybody in this room not a feeling to apologise to me? That's what I am wondering.

“I think I was already sacked I have read. Or have been sacked. Or that my colleague [Jose Mourinho] was here already.

“They have called me, a lot of times, and also Arsene Wenger is saying something about that.

“Do you think I want to talk with the media now? I am here only because of the Premier League rules. I have to talk with you. But I can only see that when I talk to you that you put it in your context.

“I have tried to lift the confidence of my players. I have done everything this week.

“I have held meetings, evaluation meetings with the players, with members of staff, I have held a Christmas lunch, I gave a speech and I feel the warmth and the the support of everybody at Carrington, this AON Training Complex.

“But I didn't feel that [warmth] in the media. I can imagine that you can write about that subject.

“We are not in a good position but four weeks ago we were in first place and in about four weeks we can again be in that position again.

“You have to stick by the facts and when I get calls from Ed Woodward, Sir Alex Ferguson and David Gill, because you are creating something that is not good, that is not being the facts, and now I have to answer questions. I don't think I want to do it.

Enjoy the wine and a mince pies.”

The Red Devils boss is feeling the pressure after a downturn in form for his side, who have won just three of their last 13 goals in all competitions.

With Jose Mourinho on the market after leaving Chelsea last week, speculation has been mounting that United could show Van Gaal the door in order to bring in the Portuguese.

The former Netherlands boss made his feelings known. He looked glum at United's Carrington training ground and accused the press of undermining him.