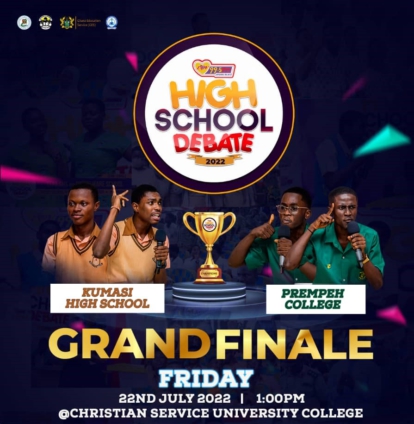 The all-exciting inter-schools debate competition for senior high students in the Ashanti Region, organised by Luv FM, has reached its climax in the 2022 edition.

Finalist in last year’s edition, Prempeh College, is set to duel Kumasi High School in the all-boys debate final after both schools proved their might throughout the competition.

The Luv FM High School Debate started off with 96 schools who were grouped into four zones to compete against each other.

During the Round of 16, promising first-timer schools like SIMMS SHS, Ghana Muslim Missions and Our Lady of Grace SHS, qualified.

The quarterfinal stage ended on a high note as the competition got keener.

Prempeh College faced Osei Tutu SHS as debaters argued on the motion: “Juvenile offenders should be tried and treated as adults”. The Amanfour triumphed on the day to make it to the finals.

The second semifinal contest which ensued between Presbyterian SHS, Bompata, and Kumasi High School saw a fierce battle on the motion: “There is nothing wrong with celebrities showing or displaying their wealth on social media”.

The Mmerante3 of Kumasi High School won this contest to reach the final.

The climaxing contest at the Luv FM High School Debate is slated for July 22, at the Christian Service University College in Kumasi at 1 pm.

The event will be broadcast live on Radio and Facebook at Luv 99.5 FM. It is also telecast on Joy Learning and Joy Prime TV channels.

This year’s competition is in partnership with Ghana Education Service, CHASS and Ashanti Regional SRC.