Mahama’s No 1 position is providential- Amissah-Arthur 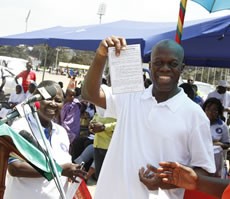 He said it was no chance, but divine that the sitting President had the number one position on the ballot paper and interpreted it as that of divine approval for President Mahama to continue to lead the nation after the December polls.

What was left, Vice President Amissah-Arthur said was for the electorate to respond to providence by voting number one position on the ballot paper for both the NDC presidential and parliamentary candidates on election day.

Vice President Amissah-Arthur made the request when he addressed rallies as part of a two-day tour of the Eastern Region.

Vice President Amissah-Arthur said the NDC stood for development and asked the people to retain the party to continue with its numerous projects.

“Vote massively for John Mahama, his position on the ballot paper is providential,” Vice President Amissah-Arthur said, at Sakora Park at Kade, after having earlier inspected the progress of work and projects at the Kade Senior High Technical School.

The projects which are almost completed started under the late President John Atta Mills. It comprised a boys dormitory, three classroom blocks, and administrative block.

The Vice President said it was the responsibility of Government to continue providing schools with facilities to support teaching and learning, and advised the students to do their part by studying seriously.

Vice President Amissah-Arthur assured the students that their vote for the NDC would ensure that more projects are done for their benefit.

“When voting, remember the Government that has brought these projects here; that Government is the one led by John Mahama,” the Vice President said.

At Boadua, near Akwatia, in the Akwatia Constituency, the Vice President introduced Alhaji Baba Jamal, Deputy Minister for Tourism, as the NDC Candidate.

He appealed to the Government to improve the road network in the area.

The Vice President had earlier called on Nana Kwabena Ofori, the Chief of Akroso.

At Akroso, the Vice President also advised political activists to avoid insults in their campaign, explaining that insults do not bring electoral victory.