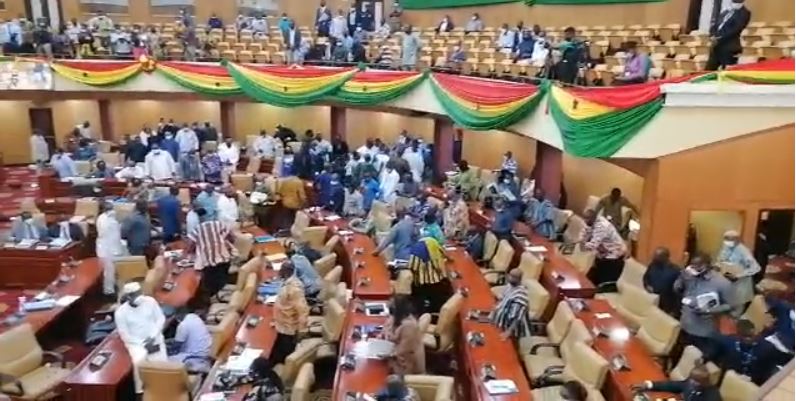 The Majority in Parliament staged an unprecedented walkout over the approval of the 2022 budget.

This followed the conclusion of the debate on the policy document.

Just before the question on the debate could be put, Finance Minister prayed the House to enable him to hold further consultations with the leadership of both sides of the House.

That was, however, turned down by the Minority and affirmed by the Speaker who argued, time had elapsed for such a request to be acceded to.

Subsequently, Speaker Bagbin put a voice vote at the end of the debate, which saw members of the Minority out-voice their counterparts from the Majority side, per his assessment.

But Deputy Majority Leader, Alexander Afenyo Markin contested this and moved for the decision to be subjected to a Division vote.

Ahead of this process, the Minority Chief Whip Muntaka Mubarak demanded that the non-MPs including Finance Minister excuse the MPs in order to facilitate an efficient Division vote.

The Speaker agreed. While all non-MPs with Finance Minister, Ken Ofori-Atta, Transport Minister, Ofori Asiamah and a Minister of State in charge of Finance, Adu Boahen were being ushered out of the House, the Majority members also demanded that NDC General Secretary, Johnson Asiedu Nketiah, who was seated in the public gallery, be subjected to same.

This demand, accompanied by noise and disorder was not honoured following which they walked out.

Meanwhile, Speaker of Parliament, Alban Bagbin suspended sitting for five minutes to enable peace to prevail in the House.

The Speaker’s decision to get the Finance Minister Ken Ofori Atta out of the plenary got the NPP MP’s incensed.

The Majority leader addressing the media served notice his side of the house will not tolerate any more disrespect from the speaker of parliament.

The 2022 budget was later approved via voice vote in the absence of the NPP MPs as they failed to reappear after the resumption from the short sitting.