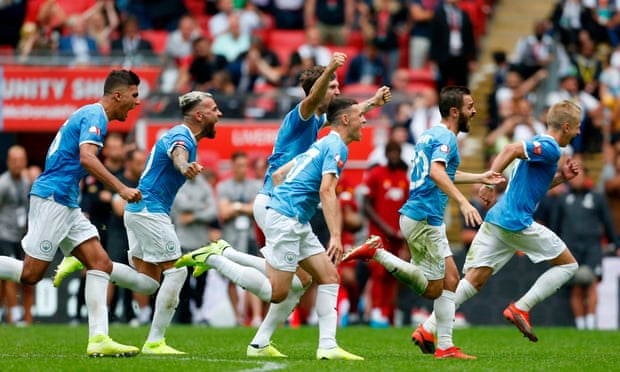 Manchester City won the Community Shield on penalties after edging Liverpool in an entertaining game in front of a raucous Wembley.

The meeting between two outstanding sides did not disappoint.

The woodwork was hit three times in quick succession in the second half, as Sterling struck the post with a one on one, Virgil van Dijk shot against the underside of the bar and Liverpool’s Mohamed Salah hit a post.

The Reds were level when Joel Matip headed home from Van Dijk’s cross.

At that stage, Liverpool were the most likely team to win with Salah having at least three chances – most remarkably when his header was sensationally cleared off the line by a Kyle Walker bicycle kick.

And so the game went straight to penalties with City scoring all of theirs.

A game whose competitive status is often questioned – and might end up meaning little as the season goes on – was nonetheless an entertaining start to the top-level season. A curtain-raiser if you will.