Marry more wives if you want to be as wise as Solomon - Joy FM listener - MyJoyOnline.com 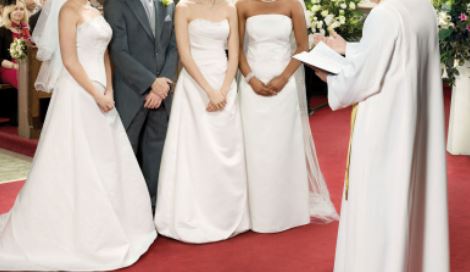 An ardent listener of Joy FM has justified polygamy.

William said the fact that many men cited in the Bible had more than one wife, is evidence that the Holy Book subscribes to the practice.

“Our old folks were at peace living peacefully – one man many wives, but we were on this continent when the white man brought his Bible and his religion. Even in there, most of the holy men had multiple wives,” he said.

William stated that polygamy is not a bad thing. He believes Solomon’s wisdom is associated with his being polygamous. (Solomon has been described as the wisest man in the Bible)

” You want your husband to be as wise as Solomon, yet you want him to marry only one wife. How will he get that wisdom? Solomon’s wisdom didn’t come cheap. If one person wants to have one wife, fine, he wants more than one, fine,” he said.

He said this as part of discussions on Joy FM‘s Super Morning Show, following recent conversations on the topic which has been sparked by the second marriage of Nigerian Actor, Yul Edochie.

The actor made it public that he has a child with his second wife.

According to him, he and actress, Judy Austin, welcomed a son, although he did not reveal how long ago it was.

Subsequently, his first wife, May Edochie, who is obviously not happy about the incident replied: “May God judge you both.”

Social media went awash with comments on the matter. While some have expressed their disappointment in the actor for this act, others don’t see anything wrong with it.

Instead of condemning the act, William advised that people who find themselves in polygamous marriages should be encouraged to live in peace.

“We should rather encourage people to live in peace, single or multiple, than to have one person pretending to have one wife with multiple side chicks hiding somewhere. Let’s go back to our roots,” he said.

Another caller, Fafa, shared a similar view. He stated that it is long overdue for polygamy to be legalised.

“All our patriarchs in the Bible how many of them married one? Even the almighty Solomon who built the temple. Let’s face the fact and deal with it and let’s stop the pretense. It will help us,’ he stressed.

He said nature itself has designed men to have more than one wife.

“Women can’t compete with men. As a woman, how many pregnancies can you carry at a time? But a man can impregnate more than one woman at a time.

Bishop, on the other hand, shared a different view. Though he did not outrightly condemn polygamy, he believes sticking to one partner is the ideal practice.

“It depends on who is the player. If he [the man] thinks that he can afford to take care of his wives he can go in for more than one wife, but ideally, to get yourself to be Godly and to worship God well, marry one wife. So please let’s look at this and do what we will be comfortable with,” he said.