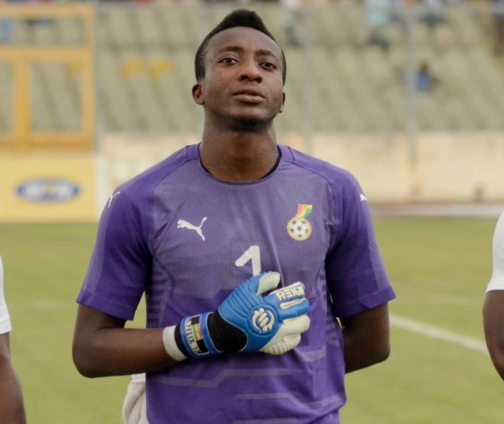 Former Asante Kotoko Goalkeeper, Felix Annan, has revealed a confrontation with his former boss, Maxwell Konadu, during their time at Kotoko, cost him a position in the Black Stars.

Felix says he was dropped at the club side, then the number one-shot stopper at Asante Kotoko, for no apparent reason.

He was considered the future Ghana number one goalkeeper for the senior national team when he earned an invitation as a local player in the 23-man squad to the 2019 AFCON tournament in Egypt.

Felix was regarded as the heir to Richard Ofori, who was then Ghana’s first choice goalkeeper.

But his position in the Black Stars was short-lived when he failed to cement his spot at Asante Kotoko.

This was after Felix tied the knot with his long-time girlfriend, Francisca Yeboah, in a private wedding ceremony in January 2020.

The wedding ceremony took place mid-season ahead of Kotoko’s clash with arch-rivals, Hearts of Oak, in the 2019/2020 Ghana Premier League campaign.

Felix, however, lost his position at Kotoko to second choice goalkeeper Kwame Baah, after his marriage and never reclaimed the number one spot.

Speaking in an exclusive interview with Nhyira FM in Kumasi, the former Kotoko captain said the development at Kotoko affected his position in the Black Stars, but he never regrets marrying his wife in the course of the season.

“Even though I lost my position at Kotoko, I do not regret the decision I took to marry my wife in the course of the season.

“No way, I will never and ever regret marrying my wife. I don’t think I am unprofessional to fix my wedding ceremony on a league date.

“My wife and her family were based in the UK then and I had planned my wedding way back before we started the league because at that time, there was no league.

“So, my wife and the family had to fly from the UK and we couldn’t change the plans,” he said.

The 27-year-old who now plays for US-based club, Maryland Bob Cats FC, blamed Maxwell Konadu for losing his position in the Black Stars.

“I have always been ready to play and represent my country ever since I received my first call up in 2017.

“I had a lot of issues with my playing time at club side which affected my chances at the Black Stars. I was just not playing and it’s not as if I wasn’t performing well, the coach [Maxwell Konadu] decided not to play me.

“Losing my position at Kotoko was one of the toughest times of my life. I wish I could get answers but I still don’t have. I confronted Maxwell Konadu but I didn’t feel the need to make the issues public.

“I felt I was good enough but the coach at (Kotoko) then, [Maxwell Konadu] didn’t give me much playing time and that’s why I lost my position in the Black Stars,” He added.

Meanwhile, Felix Annan is not giving up on any future call up at the Black Stars, as he is hopeful his time will come again.

“I have never given up. As far as I continue with my career, I am always ready and willing to push to be back again,” He concluded.

Meanwhile, Maxwell Konadu says he is not ready to talk about the allegations against him.

DISCLAIMER: The Views, Comments, Opinions, Contributions and Statements made by Readers and Contributors on this platform do not necessarily represent the views or policy of Multimedia Group Limited.
Tags:
Asante Kotoko
Black Stars
Felix Annan