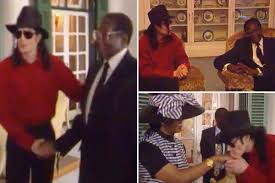 Footage of the highly secretive meeting has been released and shows the late King of Pop fraternising with the former president of Zimbabwe.

The video, which was shot in the State House in Harare in October 1998, shows Mugabe warmly greeting Jackson with a handshake. Later, the “Thriller” crooner kisses Grace’s hand.

The controversial meeting was organized to discuss ideas for the development of a hotel in Victoria Falls, but the plans never came to fruition.

“They would want to see if Zimbabwe, and especially the Victoria Falls, qualifies for a hotel, they want to establish a whole chain of hotels across the world,” Mugabe says in the video.

Mugabe has been accused of perpetrating genocide in Zimbabwe during the 1980s in which 20,000 people died.

In 1999, Mugabe referred to the massacres as a “moment of madness” but blamed them on renegade soldiers, Reuters reported.