Mourinho and Pogba have frosty exchange at Man Utd training 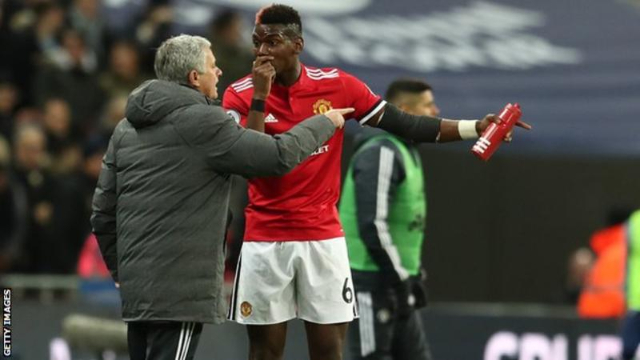 Jose Mourinho and Paul Pogba had a frosty exchange on Wednesday morning as the midfielder returned to training after being stripped of the Manchester United vice-captaincy.

The Manchester United manager denied reports of a bust-up between the pair, but Wednesday's interaction – captured by Sky Sports' cameras – suggested otherwise.

On Tuesday, Pogba watched United from the stands at Old Trafford, but left before their penalty shootout, which ended in defeat to Derby County.

He has previously been criticised for undermining Mourinho's tactics, calling for his side to "attack, attack, attack" following their 1-1 draw against Wolves.

Sky Sports reporter James Cooper was at Manchester United's training ground this morning, and said he believes the ongoing saga will "play out like a pantomime."

He said: "One thing is clear now, and this is the one thing that has changed in the last 24 hours, the whole situation is now very much out in the open."

What has been said between the pair this morning? ðŸ‘€ pic.twitter.com/nRiTEgDJlH