NCCE encourages public to get vaccinated against Covid-19 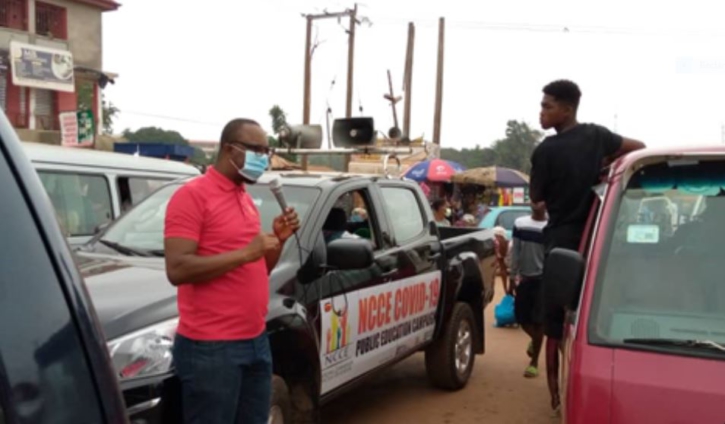 The Ashanti Regional Office of the National Commission for Civic Education (NCCE) is leading a campaign for people to get involved in the ongoing Covid-19 vaccination in the Ashanti Region.

The exercise, which is taking place in four districts; Asokwa, Kwadaso, Oforikrom and the Kumasi Metro seeks to vaccinate over 50,000 residents with a single dose of Johnson and Johnson vaccines.

According to health authorities in the Region, the four districts accounted for about 80 per cent of all Covid-19 cases since the first case was recorded in March, last year.

It is for this reason that residents in those hotspots were targeted as part of strategies to stop the spread of the virus.

The NCCE is therefore embarking on the public education campaign to whip up public interest in the exercise, which forms part of the national response plans to contain the viral disease.

It has been deploying officials of the Commission to markets, lorry terminals, churches and communities to educate the people on the need to participate in the exercise.

Other teams have also been visiting community information centres to create awareness on the exercise and encourage the people to participate for the collective good of the nation.

The Ashanti Regional Director of the NCCE, Madam Margaret Konama, told the Ghana News Agency that they had mobilised vehicles from other districts to support the campaign and called on residents to go to the various vaccination centres to take their jabs.

She said those who had already received other vaccines such as AstraZeneca and Sputnik were not eligible to take the Johnson and Johnson vaccine.

The fight against Covid-19, she said, is a collective responsibility of every Ghanaian and urged the public to support efforts of the government to overcome the pandemic.