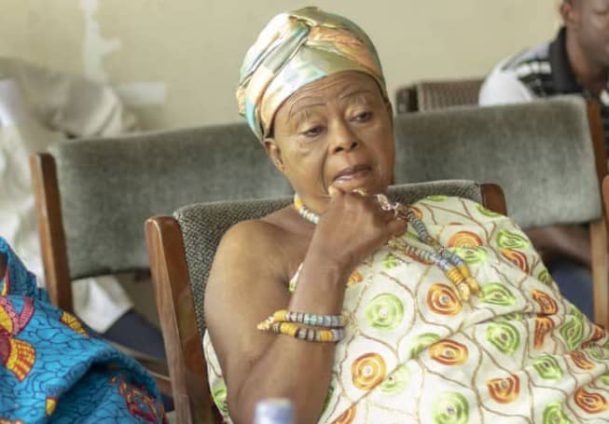 The queen mother of the New Juaben traditional area, Nana Yaa Daani 11, has passed on.

She died after a short illness at age 70.

Known in private life as Nana Afua Serwaa, she was enstooled as the paramount queen on May 8, 2000, after the demise of Nana Juaben Serwaa.

She grew up in Konongo, where she had her middle school education in 1969.

After that, she sat for the common entrance, where she gained admission to the Agogo nursing training college but dropped out after six months.

Nana Yaa Daani relocated to Teshie-Nungua in the Greater Accra region, where she helped her older sister to sell smoked fish.

She later moved to Lagos in Nigeria for greener pastures but returned to trade in foodstuffs after six months.

She is a staunched Catholic.

In an interview with Koforidua based GBC sunrise FM some five years ago, the late Queen mother claimed God revealed to her in a dream through Most Rev. Palmer-Buckle, then Bishop of Koforidua Diocese she will become the next Queen mother of New Juaben traditional area.

The traditional council is expected to meet on Thursday, where they will officially announce the death of Daasebre Oti Boateng.

The council led by the Kontinhene, Baffuor Nyantakyi Tutu Boateng 11-who is acting as the chief-will use the opportunity to deliberate on the demise of the queen mother.