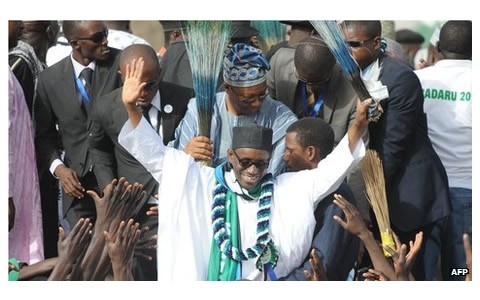 The parties said they had formed the All Progressive Congress (APC) party because the need for radical change had never been more urgent.

Mr Jonathan’s People’s Democratic Party (PDP) said it did not see the new coalition as a threat to its power.

The PDP and its presidential candidate have won every election since military rule ended in 1999.

“At no time in our national life has radical change become more urgent,” said a joint statement read to reporters by ex-Foreign Minister Tom Ikimi of the Action Congress of Nigeria (ACN) party.

“And to meet the challenge of that change, we…. have resolved to merge forthwith and become the All Progressive Congress,” he said.

PDP chairman Bamanga Tukurgave said the party was not worried about the merger.

“They are not a threat at all… PDP is Messi in that contest,” he said, drawing a parallel with Argentina’s football star Lionel Messi.

But correspondents say that if the merger succeeds, the PDP and Mr Jonathan could lose the 2015 election.

Previous opposition initiatives to unite have failed, as rival leaders fought to be the presidential candidate and bickered over policy.

Nigeria is Africa’s leading oil producer, but most of its population live in poverty.

Critics also say there is widespread corruption in government.